‘Yolanda’ survivors grieve for kin whose bodies were never found 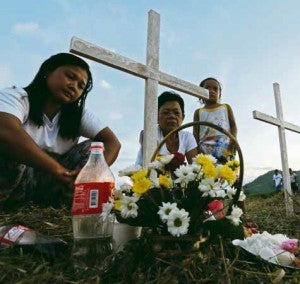 TANAUAN, Leyte—This year’s observance of All Saints’ Day and All Souls’ Day was like no other for Emelita Casilan.

For the first time, she and her family prayed for the eternal repose of the souls of 17 relatives whose deaths were caused by Super Typhoon “Yolanda” (international name: Haiyan), which hit Eastern Visayas on Nov. 8, 2013.

The 54-year-old mother of two admitted that it was not easy to pray for the souls of all her departed loved ones who, in a matter of hours, were gone due to storm surges.

She lost her parents, Vicente and Victoriana, both 75; sister Elnora Verona, 45; four grandchildren; and 10 cousins. All 17 were buried in a mass grave with 700 others in their coastal village of Caloglog, 3 kilometers from the town proper.

Tanauan, one of the hardest-hit towns in Leyte province, accounted for 1,300 of the more than 6,000 fatalities from the powerful winds and tsunami-like surges the typhoon caused. Another 600 of Tanauan’s dead were buried in a mass grave 500 meters from the municipal hall.

“We pray and stay for at least an hour. We have done this since we buried them a day after the typhoon,”she said. “At least we have a place where we can visit them any day we want. But talking about their deaths is still a struggle. If only we can avoid talking about it.”

Casilan’s consolation is that all the bodies of her loved ones were recovered.

A year on, many others are still looking for missing relatives—officially placed at more than 1,000.

Orlando de la Cruz, 13, said he had no idea where to light a candle or offer flowers for his mother, Josephine, whose body had yet to be found after their house at Sitio (settlement) Old Terminal in San Jose district in Tacloban was washed away.

“We have searched for her body but without result. We miss her,” said De La Cruz, whose father Allan, 38, and elder brother Alfred, 15, survived.

Orlando just stared blankly when asked if his mother could be among those buried in the mass graves.

On All Souls’ Day, Emilyn Cansillo went to a mass grave near Holy Cross Memorial Park in Tacloban to pray for her husband, Alexander, a Yolanda victim. She did not know exactly where her beloved was buried.

Using a permanent marker, the 38-year-old wrote the name of her husband on one of the 2,273 wooden crosses made available to survivors by the city authorities, took it to a spot in the 1.2-hectare sprawl, lighted a candle and prayed.

“I am not really sure if it is the body of my husband who is buried here. But for some reason, my feet led me to this place,” Cansillo said.

Thousands of survivors like Cansillo went to the mass grave on Sunday to do exactly as she had done.

The area contains the remains of 2,273 dead, who were earlier hastily buried at the mass grave in Barangay (village) Basper, a kilometer away.

The remains were transferred to Tigbao from Basper in January because the city government wanted to convert the mass grave in Tigbao into a memorial park. The transfer was completed in March.

Edilbrando Bernadas, head of the City Services Office, said the local government respected the wishes of the relatives where they wanted to place the crosses. Writing the names of the victims on crosses and putting these on the plots they chose somehow gave the relatives a feeling of relief, he said.

Marichu Cartalla, 41, wrote the names of her 3-year-old son, Ralph Jico, and stepfather, Juanito Capac, 62, even if she never found their bodies.

“The place where we planted the crosses with the names of my son and stepfather may not be the right one, but at least we have a spot where we can visit and offer candles and prayers every time we come here,” Cartalla said.