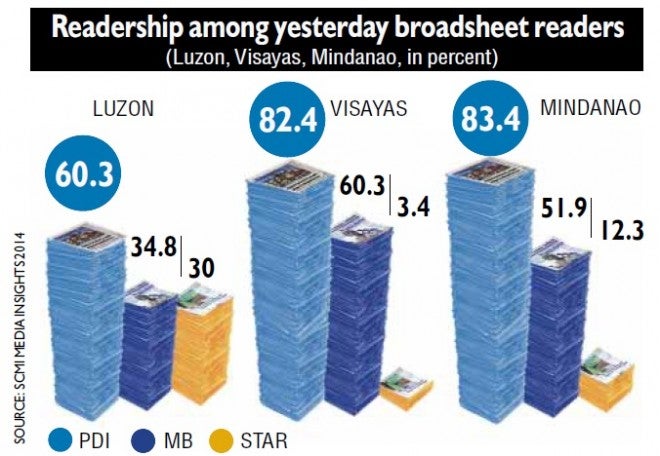 MANILA, Philippines–With a million readers every day, the Philippine Daily Inquirer remains the No. 1 newspaper in the country, according to a study by Strategic Consumer and Media Incites Inc. (SCMI), a media and consumer research agency.

SCMI’s first Media Insights Study conducted in the third quarter of this year showed that the Inquirer was the newspaper of choice among yesterday broadsheet readers in Luzon, the Visayas and Mindanao. The Inquirer was also favored by most readers from Class ABC1.

The study showed that the Inquirer was read by two-thirds of respondents (66.8 percent) who read a newspaper the day before in Urban Philippines. This is equivalent to 1.01 million readers—more than the combined readership of Manila Bulletin (603,000 readers) and Philippine Star (370,000 readers).

Manila Bulletin was read by 40 percent of respondents, who read a newspaper the day before, and Philippine Star by 24.6 percent. The percentages add up to more than 100 percent because multiple responses were allowed.

The question posted to respondents was: “Apart from today, when did you last read a copy of (newspaper title)? (Yesterday, past week and longer ago)”

The annual single-source study, which interviewed 2,000 respondents aged 10 and above in July and August, covered Metro Manila and nearby areas Bulacan, Cavite, Laguna, Rizal and Pampanga; the cities of Tuguegarao, Baguio, Dagupan, Cabanatuan, Olongapo, Batangas, Puerto Princesa, Naga and Legazpi in Luzon; Metro Cebu and the cities of Iloilo, Bacolod, Dumaguete and Tacloban in the Visayas; and the cities of Davao, Cagayan de Oro, Butuan, General Santos and Zamboanga in Mindanao.

A love affair with Inquirer

Read Next
Prosecutor in Laude slay shakes off ties to ‘Nicole’ case
EDITORS' PICK
Essential workers: The many faces of pandemic heroism
Through the lens of BJ Pascual: From famed celebrities to young business magnates
Experience clearer calls nationwide with Smart VoLTE
Fairways & Bluewater Resort Boracay shines in the International Arena
Finding ‘3rd generation’ crucial in contact tracing, says Magalong
2020 Filipinos of the Year: Health-care front-liners
MOST READ
Heavily armed man arrested at Washington security checkpoint
Ryan Garcia to Pacquiao: ‘Please pass the torch to me’
US capitals on edge for armed protests as Trump presidency nears end
For P500, you can book this QC garden for private dining
Don't miss out on the latest news and information.