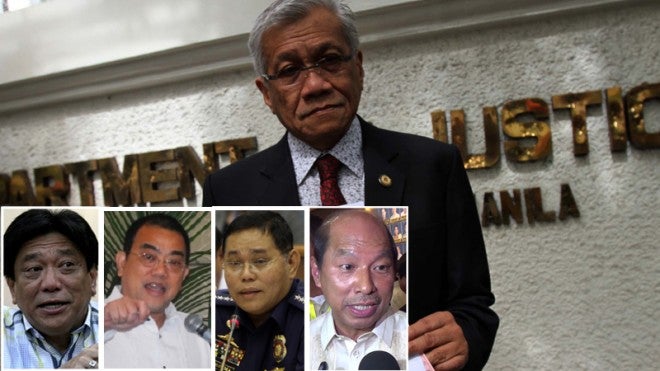 MANILA, Philippines–President Aquino is scrutinizing the performance of Vice President Jejomar Binay as a member of his Cabinet amid allegations of corruption against Binay and his family, Malacañang said on Sunday.

“The Aquino administration is losing moral high ground on the anticorruption issue. We cannot have double standard by condemning Vice President Jejomar Binay while tolerating administration allies involved in the [Janet Lim-]Napoles [pork barrel] scam and the [Disbursement Acceleration Program, or DAP]. Double standard has a tremendously corrosive effect on civic morality,” Akbayan Rep. Walden Bello said in an interview with the Inquirer.

“Getting rid of Binay is only half the challenge facing the country. The other half is continuing the reform program,” Bello said.

“Unless the President gets rid of those around him who have compromised the reform agenda, it will continue to lose credibility. I can’t understand why these millstones around the President’s neck don’t have the [sense of propriety] to resign,” he added.

Like other Cabinet officials, Binay is undergoing a “performance audit” as presidential adviser on overseas Filipino workers and head of the Housing and Urban Development and Coordinating Council, Communications Secretary Herminio Coloma said on state-run radio.

“The President himself is the one evaluating his (Binay’s) effectiveness in this position and keeping his post is based on the President’s continued trust and confidence,” Coloma said.

So far, Aquino has not said that he has lost his trust and confidence in the Vice President, he added.

A Senate blue ribbon subcommittee is investigating alleged corruption in Makati during Binay’s term as mayor of the city, including alleged overpricing of the P2.28-billion Makati City Hall Building II.

Former Makati Vice Mayor Ernesto Mercado, the principal witness in the investigation, has alleged that Binay pocketed kickbacks from municipal infrastructure projects and used dummies to conceal his ownership of an 8,877-square-meter real estate property in Comembo village in Makati and a 350-hectare agricultural farm in Rosario town, Batangas province.

Asked if the allegations against Binay could eventually affect the Aquino administration since the Vice President was a member of the Cabinet, Coloma pointed to how Binay was performing as housing chief and presidential adviser.

“These are areas where he is expected to perform his responsibilities as a member of the Cabinet,” Coloma said.

Aquino earlier asked members of his Cabinet to sign “commitment contracts” as a way of concretely evaluating their performance during a given period.

Some Cabinet officials, including Binay, failed to attend a recent Palace event where they were supposed to sign a “Cabinet performance pledge.”

In a previous interview, Coloma played down Binay’s absence, saying: “What is important is we understand the context of the event.”

“All agencies, all Cabinet-level departments are part of this process to commit under the concept of performance-based budgeting. The specific event of signing the contracts shows the personal commitment of the secretaries summarizing their commitment,” Coloma said.

Presidential spokesman Edwin Lacierda earlier said the signing of “Cabinet performance contracts” was part of an “outcome-based planning strategy” meant “to reinforce the Cabinet secretaries’ commitment to the President and ensure the delivery of their agencies’ priority programs and projects.”

Bello has listed others whom he calls “trapos” (traditional politicians) masquerading as reformers.

First on his list was Abad, who was also the subject of his scathing complaint to Aquino in August that he reiterated to the President recently.

“I initially believed that the DBM (Department of Budget) secretary acted without malice but the baring of the list of congressional beneficiaries of the DAP floored me,” Bello said.

The DAP was an economic stimulus fund that Abad put together using savings of different government agencies. The Supreme Court declared it unconstitutional on July 1.

Too much for tiny Batanes

“Not only [did] LP (Liberal Party) members running tight races and the administration’s close allies [get] the lion’s share [of the DAP], but Mr. Abad gave his wife (Batanes Rep. Henedina Abad) the sixth-largest allocation. Batanes is the smallest district with the smallest population and smallest number of registered voters, and Congresswoman Abad gets P177 million. This is outrageous,” Bello said.

Bello noted that more than half of Batanes province’s DAP allocation was made in the second half of 2012 and in the first half of 2013, or the height of the election campaign.

“The DAP funds made a difference in the outcome; she won by only 137 votes. That’s bloody unfair, as the Brits would say,” he said.

“I told the President that the congressional list opened the [DBM] chief to charges of nepotism, and I was really, really worried that would fatally wound the reform agenda, unless Abad left. The President said he would look into it,” Bello said, adding that he was speaking for himself and not for Akbayan, which has several members in the Aquino administration.

Aside from Abad, Bello said it was time for the President to let go of De los Reyes to “straighten out” his agrarian reform legacy.

De los Reyes did not respond to the Inquirer’s request for comment.

On Alcala, Bello said he saw no point in having two de facto heads for the agriculture department (former Sen. Francis Pangilinan was appointed presidential adviser on national food security).

“This department is headed to the doldrums. It will simply bring about a fatal division of responsibility and accountability. It’s the height of indecision. Why not give the fresh face full command?” Bello said.

Alcala said his stay in the Cabinet was all up to the President.

On Purisima, Bello said that while he considered the charges of unexplained wealth against the police chief serious, Purisima should be taken out for ineptitude in dealing with the law and order situation.

“It has really gone out of control, yet we have a somnambulist for a PNP chief, one who even tries to use statistics to deny the hard reality of rising criminality. The President should realize that the inability to contain crime erodes democracy, as it frightens the middle class to calling for authoritarian leadership,” Bello said.

He said the President also needed to shake up his managers in transportation, energy and foreign affairs.

“People will not tolerate an economic policy that promotes growth whose benefits do not filter down to them. The reform program badly needs a rebooting and this means fresh faces in the Cabinet,” Bello said.

“Those of us who really believe in the reform program have a stark choice: Either we get dragged down by the foolish, the corrupt and the inept in the ruling coalition, or we speak out and tell the truth, even if that may incur the President’s displeasure. It’s for his own good and that of his cherished bosses,” he said.