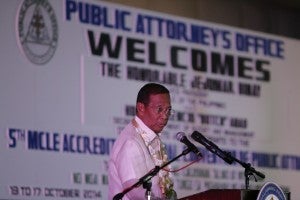 MANILA, Philippines — Vice President Jejomar Binay will most likely not attend the Senate investigation hearing on the alleged corruption in Makati City when he was mayor.

A television report said he was in Cebu.

This even as the Senate blue ribbon committee sent a formal invitation to Binay to attend the hearing on the alleged overpriced Makati City Hall 2 parking building.

“The committee on accountability of public officers and investigations would like to reiterate our invitation to his Excellency to make an appearance in a public hearing on Thursday, Nov. 6, 2014 at 10:00 a.m. to be held at the Senate plenary hall, Senate of the Philippines, GSIS Building, Pasay City…” Senator Teofisto “TG” Guingona III, chairman of the committee, said in his letter to Binay dated October 28.

“Sayang” (It’s a pity) was all Senate Blue Ribbon Committee chair Senator TG Guingona could say after announcing that Binay would not attend the hearing.

(With the Vice President’s refusal, the opportunity to let our countrymen hear his side was lost.)

He added that Binay’s representatives – United Nationalist Alliance (UNA) Interim President Navotas Representative Toby Tiangco and UNA interim Secretary General JV Bautista met with them this Thursday morning and asked that they be allowed to read Binay’s statement and affidavit during the hearing.

He said while he approved this, he was overturned by his committee members – Senators Alan Peter Cayetano, Antonio Trillanes IV and Aquilino Pimentel III.

“If they wish they may submit it to form part of our records but it was agreed after voting that the representative would not be allowed to read the statement,” Guingona said.

Binay told to brace for tough questions in Senate probe