Binay in Cebu, not Senate 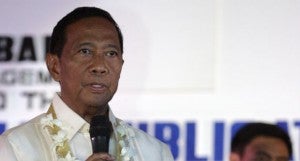 MANILA, Philippines – Vice President Jejomar Binay did not attend the Senate blue ribbon committee hearing on Thursday because he was in Cebu.

A television report said Binay arrived in Cebu on Thursday morning and would head to Toledo City where he would meet with business and government officials.

He will talk to Toledo City Mayor John Osmena about housing projects and will attend the Boy Scouts of the Philippines (BSP) Centennial Jamboree at Cebu City the next day.

Binay is expected to stay in Cebu until Saturday.

Senators have been convincing the Vice President to attend the blue ribbon committee hearing so he could personally address the accusations of corruption against him.

However, the embattled official had repeatedly said he would address the issue in another venue. He claimed that the senators had “prejudged him.”

Binay is accused of pocketing kickbacks from the construction of the alleged overpriced Makati City Hall parking building. His critics also claimed that his family used ill-gotten wealth to acquire and develop a 350-hectare estate in Batangas, in addition to using a dummy, businessman Antonio Tiu, to appear as the owner of the property.

Senators were hoping he would appear on Thursday because it was the mother blue ribbon committee itself that sent the invitation, instead of the subcommittee headed by Senator Aquilino “Koko” Pimentel III.