Binay told to brace for tough questions in Senate probe 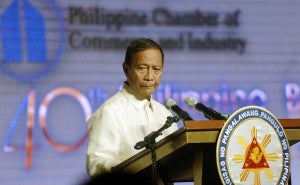 MANILA, Philippines — While Vice President Jejomar Binay would be treated with respect if he faces the Senate blue ribbon committee this week to answer charges of corruption, he should not expect softball questions, Sen. Aquilino Pimentel III has said.

Pimentel, chair of the blue ribbon subcommittee leading an inquiry into allegations of corruption and ill-gotten wealth against Binay, rejected on Sunday, calls from the Vice President’s allies to strike off the record the testimony of former Makati City Vice Mayor Ernesto Mercado, who has alleged that Binay received kickbacks from city projects and used dummies to conceal his wealth.

Sen. Teofisto Guingona III, chair of the blue ribbon committee, earlier invited Binay to a hearing on Nov. 6 so he could answer the charges.

Guingona sent out the invitation after Binay’s camp said the Vice President might consider appearing in the Senate if the invitation would come from the mother committee and not the subcommittee.

There is still no word from Binay’s camp whether he would come to the Nov. 6 hearing, which will be reserved for him alone.

Pimentel earlier said he planned to attend the hearing. He said other senators might ask questions there.

Speaking on dzBB radio on Sunday, Pimentel said Binay, like other resource persons, would be given the chance to make an opening statement if he had one. Guingona assured Binay that he would be treated with respect, but Pimentel said this did not mean he would be asked easy questions only.

He also said Binay might be asked about the evidence presented at the subcommittee hearings.

Mercado’s testimony comprises a large part of the evidence presented at the hearings.

Binay’s allies have called on the Senate to strike Mercado’s testimony off the record because he lied about never being hospitalized as he denied claims that the Liberal Party’s Mar Roxas visited him in hospital when he got sick.

United Nationalist Alliance (UNA) officials showed records from University of the East Ramon Magsaysay Memorial Medical Center (UERMMC) that Mercado was treated there on Oct. 1 and 4, and cited his statements that he would retract his testimony if he was proved to be lying.

But Mercado denied being hospitalized on those dates, and a UERMMC official, who declined to be identified, said the hospital had no records of Mercado receiving treatment there.

Pimentel said he was not keen on deleting Mercado’s statements from the record, noting that Mercado had denied UNA’s allegation about his being treated at UERMMC.

“The testimonies of Mercado are all recorded [in the Senate]. It’s not in his hands to strike these off the record or not,” Pimentel said.

Striking off the testimony, he said, could be done if Mercado would submit an affidavit saying he lied, recanting his testimony and specifying which of his statements he was taking back.

As for the UNA officials’ claim that Mercado had no credibility, Pimentel said that was their point of view. “But why don’t we look at the content of the witness’ statements?” he said. “Is what the witness saying incredible?”

He noted that Hilmarc’s Construction Corp. chair Efren Canlas invoked his right to protect himself from self-incrimination when asked about Mercado’s allegation that Hilmarc’s built or made the improvements on the 350-hectare farm in Rosario town, Batangas province, allegedly owned by Binay.

“So we have not gotten any information from Canlas if Vice Mayor Mercado was right or if he was contesting [Mercado’s] statements,” Pimentel said.

Pimentel also said that for him, businessman Antonio Tiu landed himself in more trouble with his latest testimony to the subcommittee, which raised more questions than answers. Tiu has claimed ownership of the Batangas farm being linked to the Vice President, but the senators on the subcommittee doubted his explanations.

Pimentel said he was having the transcripts of the subcommittee checked to see if Tiu had committed “outright lying” under oath. Such a case would constitute not only perjury, but also contempt, he said.

“Going there to give us a hundred lies can be contempt. That can be perjury and contempt because you have a different goal, which is to muddle the hearing,” he said.

But those were small offenses compared to possible money laundering, violation of the agrarian reform law, and tax evasion, for which Tiu might face charges, Pimentel said.

He said he might call the Anti-Money Laundering Council to the subcommittee hearing to ask it to consider examining Tiu’s financial transactions.

Earlier, Sen. Alan Peter Cayetano said Tiu could be laundering money for the Binays because the companies in the British Virgin Islands that had investments in Tiu’s companies had connections with the Vice President’s lawyers.

Tiu has denied being a dummy for Binay and claims he is a legitimate businessman working with some of the world’s best companies.