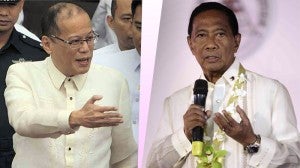 MANILA, Philippines – While Vice President Jejomar Binay is engrossed in fending off accusations of corruption, Malacañang is busy assessing his performance as a Cabinet official.

(In that aspect, there is a need to scrutinize how he handles responsibilities entrusted to him by the President.)

Binay has been accused of accumulating ill-gotten wealth through kickbacks in the construction of infrastructure like the Makati City parking building.

Coloma said the Vice President is expected to focus on housing and the plight of overseas Filipino workers (OFWs) as the head of the Housing on Urban Development and Coordinating Council and as Presidential Adviser on OFW Affairs.

(The President himself scrutinizes and evaluates his effectivity in the given posts.)

(His retention of the posts means that he still has the confidence and trust of the President.)

Nevertheless, Coloma said the Palace would also assess the performance of all Cabinet members.

On Sunday, the Inquirer reported that Binay was seeking control of a 57.7-hectare lot on Mt. Makiling in Laguna, which was being leased by the Boy Scouts of the Philippines (BSP) from the University of the Philippines Los Baños (UPLB).

Asked if the allegations against Binay could eventually affect the Aquino administration since the Vice President was a member of the Cabinet, Coloma pointed to how Binay was performing as housing chief and presidential adviser.

“These are areas where he is expected to perform his responsibilities as a member of the Cabinet,” Coloma said.

Aquino earlier asked members of his Cabinet to sign “commitment contracts” as a way of concretely evaluating their performance during a given period.

Nearly two weeks ago, some of these Cabinet officials, including Binay, failed to attend a Palace event where they were supposed to sign a “Cabinet Performance Pledge.”

In a previous interview, Coloma downplayed Binay’s absence, saying: “What is important is we understand the context of the event.”

“All agencies, all Cabinet-level departments are part of this process to commit under the concept of performance-based budgeting. The specific event of signing the contracts shows the personal commitment of the secretaries summarizing their commitment,” Coloma had said. With a report from Christian V. Esguerra

Estrada on Binay ‘persecution’: Same thing happened to me