Estrada on Binay ‘persecution’: Same thing happened to me

TIGAON, Camarines Sur—Former President and now Manila Mayor Joseph Estrada, who admitted to accepting P200 million from a “jueteng” lord, said Vice President Jejomar Binay was experiencing “persecution” similar to what he went through when he was in Malacañang.

Attending the 69th birthday celebration and the launching of the memoirs of former Camarines Sur 4th District Rep. Arnulfo “Noli” Fuentebella here on Wednesday, Estrada said Binay, who is being investigated by a Senate subcommittee on charges of corruption, was also being accused of many things, as he was in 2000.

But he said he believed the accusations against Binay could not be proven.

‘Conspiracy of the rich’

Estrada blamed Binay’s crisis on a “conspiracy of the rich,” which he said was similar to the 2000 plot by the elite to remove him from power.

Estrada said his detractors used all the means to destroy him, including getting the press to favor his adversaries, but nothing was proven against him.

He was ousted from power during massive, popular protests in January 2001. Three months later, he was indicted for plunder in the Sandiganbayan and he was arrested and detained.

In October 2007, Estrada was convicted, but was pardoned by then President Gloria Macapagal-Arroyo. 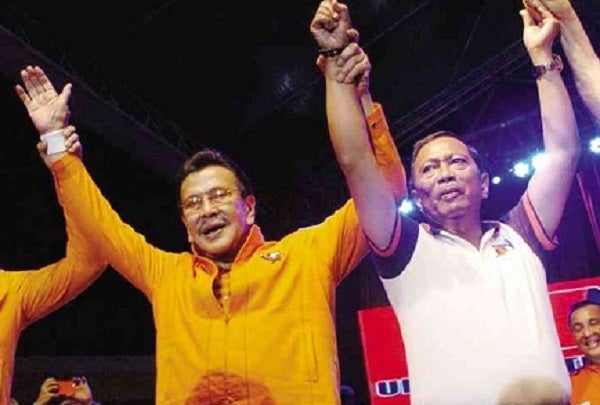 But Estrada was candid, admitting he accepted P200 million from a jueteng lord but put the money in the account of a foundation he had established to help finance the education of poor Muslim students.

He said it started when he was told by the president and faculty of Mindanao State Colleges about the financial problems of Muslim students.

Estrada said he organized a fund-raising campaign and invited rich people to contribute to an educational fund for Muslim students. He said he was able to raise P36 million, which he used as seed for the Erap Muslim Scholarship Foundation.

Later, he said, a jueteng lord whose identity he did not disclose came to him and offered P200 million for the foundation.

“I told the Muslim foundation to accept the money,” Estrada said.

Estrada defended his decision, saying his intention was clean.

“I did not benefit from it. It’s the mayors, governors and congressmen who benefited from the money,” he said.

He said that immediately after he left Malacañang in 2001, Hernando Perez, President Arroyo’s first justice secretary, talked to him and asked him to resign as president so no cases would be filed against him.

He said he was also told he could leave the Philippines, bringing anything he liked, if he would resign.

He said he rejected the offer.

A Senate blue ribbon subcommittee is investigating allegations of corruption against Binay, including overpricing in the construction of the P2.28-billion Makati City Hall Building II, pocketing kickbacks from municipal infrastructure projects when he was mayor of the city, and using dummies to conceal his ownership of real estate properties in Makati and Rosario town in Batangas province.

Corruption would be biggest issue in 2016 polls

Estrada: Past ‘inefficient governance made Manila the gates of hell’