Estrada: Past ‘inefficient governance made Manila the gates of hell’ 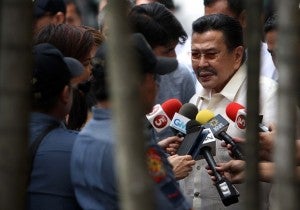 MANILA, Philippines—Former President and now Manila Mayor Joseph “Erap” Estrada on Wednesday said the “inefficient governance” in Manila by the past administration made the city the “gates of hell.”

“Six years of inefficient governance made Manila the gates of hell,” Estrada said during his State of the City Address (Soca) at the Ninoy Aquino Stadium in Manila.

Estrada said that he inherited from the previous government “poor peace and order, saddled debt, and bloated bureaucracy.”

The former president also mentioned the increase in revenue collections during his term compared to the previous administration.

He also reiterated his commitment to the Manila police to beef up measures to promote the city’s peace and order.
He said thousands of “orange cards” have been distributed to poor families for their free access to healthcare and medicines.

Estrada’s Soca was attended by officials of the city government of Manila and the people of Manila.