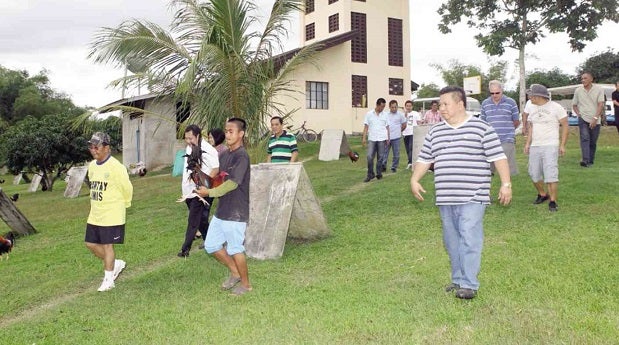 STROLLING AT THE COCK FARM LIKE HE OWNS IT Vice President Jejomar Binay at the fighting cock farm inside the alleged “Hacienda Binay” in Batangas province. This picture was taken from the Facebook account of Sunchamp employee Grace Martinez, who assisted in the press tour of the estate during Sen. Antonio Trillanes IV’s inspection of the property on Oct. 23. The account has since been taken down. FACEBOOK PHOTO

“This is too much,” Vice President Jejomar Binay said on Friday, decrying the showing of pictures of his youngest daughter in the Senate on Thursday as a way to prove he owns a 350-hectare property in Batangas province.

Binay said his daughter Joanna Marie Bianca Binay was dragged into the controversy as part of an effort to malign his name.

“It’s bad enough that [my own image is] being tarnished. But why involve my youngest child? They threw her among those they shame and deride. God will take care of them,” Binay said in a radio interview in Camarines Sur province.

During the hearing called by the Senate blue ribbon subcommittee looking into allegations of corruption against Binay, Sen. Alan Peter Cayetano showed pictures posted on Instagram by the Vice President’s daughter showing her on the Batangas estate.

One of her posts, which came with a picture of three boys frolicking in a pool, identified the location as “our place in Batangas.”

But Binay said being photographed on the property did not prove ownership of the estate.

In a telephone interview on Friday, Cayetano said his job was “to fight for all Filipinos” and “to protect them from untouchable corrupt officials.”

“I never mean any disrespect nor do I drag people who are not involved,” Cayetano said. “However, when it comes to the people’s money, especially billions of pesos in taxpayer money, I cannot ignore evidence. If the best evidence comes from his family, should I ignore it? Especially since their social media post was public, not private. I did not invade their privacy.”

Cayetano asked if Binay’s youngest daughter was denying her post that her family owned the place.

“Is she even denying that she posted that, and that her family treats the hacienda as their own?” Cayetano asked.

Cayetano agreed that one picture does not prove ownership. But he said that taken together with the testimony of witnesses, pictures of different groups on the farm, and land titles in the names of Binay’s associates, “this is crucial evidence.”

“Rather than make excuses and point to evidence, why doesn’t he make a cohesive answer? That’s why he prefers a debate to a hearing. Because he keeps changing his story,” Cayetano said.

“They no longer respect protocol. They sent Rep. Toby Tiangco away and I heard they had him physically removed from the hearing,” Binay said.

“That’s the Cayetano brand. He wants to be seen as powerful. The people who were summoned to the hearing had the right to legal advice, but even the lawyer was sent away. I don’t understand. Those people in the Senate have their own law,” he said.

Binay appealed to senators on the subcommittee to raise their standard of politics and not resort to mudslinging.

He said his detractors should not resort to lies to smear him.

“Present your plans to the people instead. We should aim for clean politics,” he said.

Binay also blamed the drop in his ratings on the attack by his rivals, which he said was “the work of PR” and “paid broadcasters.”

“The attacks against me have been intensified. The PR officers are feasting on me. Those broadcasters are paid per strike,” Binay said, but did not identify the broadcasters.

Binay defended his rating, saying it was not only his number that fell in the latest trust poll.

“The ratings of almost all the people in the government led by President Aquino dropped,” he said.

He pointed out that the last Pulse Asia poll, taken between June and September, which showed his number dropped to 15 percent, was conducted before he addressed the nation from the Philippine International Convention Center on Sept. 18 to defend himself against charges of corruption.

“The people have not yet heard or seen on TV our side at that time,” he said.

Meanwhile, Bautista said members of the blue ribbon subcommittee crossed the ethical line in the conduct of investigation by shaming witnesses and embarrassing innocent people.

Bautista said that in their desperation to tarnish Binay, the senators willfully allowed former Makati Vice Mayor Ernesto Mercado to lift the modest picture of the Vice President’s youngest daughter from Instagram.

He added that Mercado and the three senators turned the Senate into a theatrical production of sorts by spreading lies and fabricated stories to pin down businessman Antonio Tiu as an alleged dummy for Binay by showing pictures of the Vice President’s daughter.

Bautista said gone were the days when the Senate was a bastion of democratic debate and dialogue, noting that the Senate inquiry has been one-sided in appraising the testimonies of witnesses and receiving evidence to arrive at predetermined conclusions.

“Last Thursday was the lowest point in the Senate inquisition,” Bautista said.

Bautista said that the pictures lifted from Instagram were intended to link the Binays to the Batangas property.

“They dragged the name of the VP’s youngest daughter but the photos are not evidence. In the first place the Binays have never denied using those facilities because Mrs. Binay has a flower farm [there] and they are leasing the area. If you’re renting an apartment, you don’t own it but it is ‘your place’ and that’s all it is. The pictures again do not prove ownership but they do prove the perverted mindset of the inquisitors,” Bautista said.

Bautista added that “there seems to be nothing that the Senate inquisitors will not stoop to doing in their persecution of the VP and his allies.”

“They dragged in the innocent online musings of his youngest daughter as well as totally irrelevant details like Mr. Tiu’s wearing of fatigues at the Tiu farm. [It was Binay in fatigues.–Ed.] They hid behind technicalities in order to muzzle the VP’s spokesmen from voluntary appearance,” he said.

“When the Senate says that it will seek the truth, it must seek the truth. And it must receive all and every kind of evidence to arrive at the truth. The trouble with the subcommittee is that they are selective. They don’t want to hear the side of Vice President Binay. That’s why they do that, and they will go to great lengths to throw us out of the subcommittee, just so we will not be allowed to bring out the truth,” he said.

Bautista turned on administration allies who he said were using the “government’s machinery” to harass and intimidate innocent people who they believed were associated with Binay.

“And now they have unleashed the [Bureau of Internal Revenue, Department of Agrarian Reform, the Securities and Exchange Commission]—and God knows what other government agencies in order to harass Mr. Tiu, a self-made businessman and [Ten Outstanding Young Men] awardee. This last tactic is also obviously intended to frighten away people who might want to speak up for the Vice President and the truth,” Bautista said.

“The damage this kind of intimidation does to our political culture and the nation’s morale will long outlive this Senate inquiry, to the eternal shame of its instigators,” he said. With a report from TJ Burgonio