MANILA, Philippines — A daughter of Vice President Jejomar Binay was dragged into the controversy over a property in Batangas allegedly owned by her father after Instagram photos and comments she had posted indicated her family’s ownership of the 350-hectare estate.

Senate Majority Leader Alan Peter Cayetano showed these photos and posts by Joanna Marie Bianca Binay in a slide presentation during Thursday’s hearing by the Senate blue ribbon subcommittee that has been investigating Binay’s alleged ownership of the Sunchamp Agri-Tourism Park.

In one of her posts, Binay’s daughter referred to the property as “our place in Batangas.”

“Tingnan nyo po, sabi nya in our place in Batangas,” Cayetano pointed out.

The senator then asked Martin Subido, lawyer of alleged Binay dummy, businessman Antonio Tiu, if they had no plans to file a case against Binay’s daughter for claiming that the property belonged to her family.

Tiu has denied the “dummy” claims. 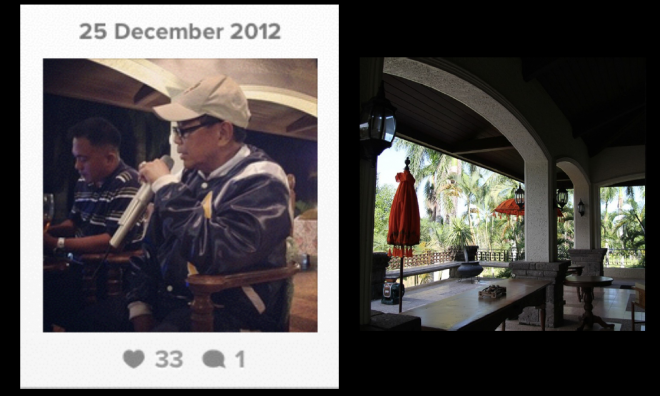 “What was ‘our place in Batangas’ mean? Cayetano again asked.

“It could mean a lot of things, your honor,” said Subido to which the senator asked, “In what world?”

“In any sense of a man’s world your honor,” Subido added.

Another photo posted on December 25, 2012, showed the Vice President himself holding a microphone.

But in a statement, Binay’s spokesman, Cavite Governor Jovic Remulla, said the photos  could not be used as proof of ownership.

“The Vice President and his family have been open about using the facilities and visiting Rosario. For one, Dr. (Elenita) Binay has a flower farm there. But these photos, like previous photos shown by Sen. Cayetano, are not proof of ownership,” the spokesman added. 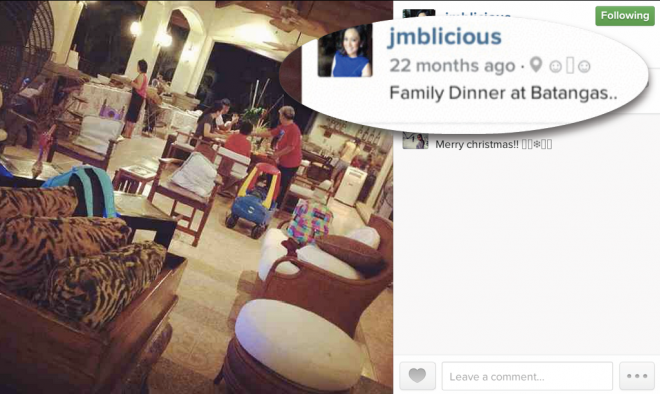