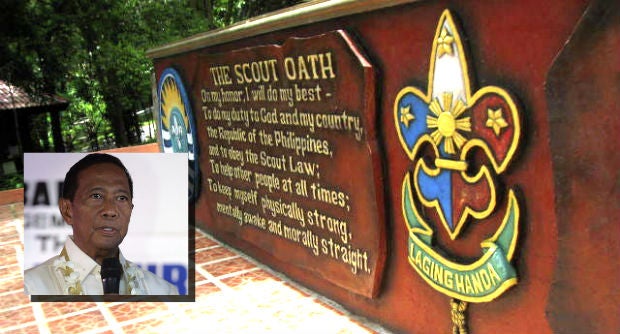 LOS BAÑOS, Philippines—Vice President Jejomar Binay, through his allies in Congress, allegedly has made several attempts to acquire control of the 57.7-hectare lot on Mt. Makiling that the Boy Scouts of the Philippines (BSP) is leasing from the University of the Philippines Los Baños (UPLB).

Several former and incumbent UPLB officials disclosed in separate interviews what they called “attempts” by Binay to carve out the BSP Jamboree site from the 4,244-hectare Makiling forest reserve.

“It should be known that there have already been three attempts by Binay, through the Congress, to have [the property’s] ownership transferred to the BSP,” said a UPLB source privy to the management of the Makiling forest reserve, but who asked not to be identified for lack of authority to speak on the matter.

A check of UPLB records showed that three bills were filed in the House in relation to the attempted transfer of jurisdiction over the Makiling property to the BSP.

The most recent is House Bill No. 6352, or the “Boy Scouts of the Philippines Charter of 2012,” authored by Representative Binay.

Although there is no explicit mention of the Makiling property, the bill has the same intention as the two other bills, the source said.

The source was referring to HB 4765, or “An act vesting the (BSP) with jurisdiction and administration over a parcel of land located at Mt. Makiling, Los Baños, Laguna, to be known as the ‘Boy Scouts of the Philippines Jamboree Site,’ and for other purposes,” which was an amendment to an earlier bill, HB 3005, that contained similar provisions.

HB 4765, filed in 2005, and HB 3005, filed in 2001, were both authored by former Marikina Rep. and now Marikina Mayor Del de Guzman and were cosponsored by Representatives Leovigildo B. Banaag, Roseller L. Barinaga, Francis Joseph G. Escudero and Agapito A. Aquino.

De Guzman, a known ally of the Binays, was council chair of BSP Metro Manila East.

Former Makati Vice Mayor Ernesto Mercado—a former close Binay ally who has turned against him and exposed the alleged irregularities in Makati and Binay’s ownership of a 350-hectare agricultural estate in Rosario town, Batangas province—was BSP chief for the National Capital Region and council chair of BSP Makati in 2005.

“We’re afraid that chunking out [the forest reserve] might set a precedent for other stakeholders [like local governments] to claim a piece of the Makiling forest. We just want to keep this ecological heritage intact,” Sanchez said.

He said the BSP has been offered another UPLB land grant in Siniloan town, Laguna province, “to show that we support scouting.”

Sanchez, formerly UPLB vice chancellor for planning and development, said university officials were surprised that the hotel and cell tower were constructed within the forest.

“They told us they would just do some renovations to the Romulo Hall (a building being used for functions), but we were surprised that a hotel was built instead,” he said.

Sanchez said the UPLB had raised the issue with the BSP and it would be part of the discussions before the BSP’s lease contract expires in 2015.

The BSP jamboree site is leased out by UPLB to the BSP under a 25-year contract that will expire in 2015. Binay is the longest-serving president of the BSP, since he was first elected by the scouting board in 1994. The BSP has about 2 million members.

The Vice President’s camp on Saturday refused to comment on the matter.

A BSP official, however, said on Saturday that there were no attempts by Binay to take full control of the jamboree site.

The BSP national executive board and national council, not Binay, have proposed that the BSP be given autonomy to administer the entire property, the official said.

A Senate blue ribbon subcommittee is investigating alleged irregularities in Makati City during Binay’s term as mayor, including overpricing in the construction of the P2.28-billion Makati City Hall Building II.

The subcommittee has expanded its investigation to cover alleged corruption and ill-gotten properties of Binay.

UPLB has registered strong opposition to moves in the House of Representative to transfer the jamboree site to the BSP.

In December 2005, then UPLB Chancellor Luis Rey Velasco issued a memorandum “to consolidate our efforts to effectively respond to this unwanted move of [the] BSP.”

Velasco said university officials were surprised at the attempts to take control of the property when the BSP had been leasing the land at a very low annual rate—P1 per hectare.

“We’re getting almost nothing [from the lease],” Velasco said in a phone interview.

The UPLB source said one of three bills made it to a third and final reading in the House.

“We wouldn’t have known if not for one (UPLB) alumnus, who happened to be a staff member in the [House], who tipped us off,” the source said.

The university launched a massive signature campaign from 2005 to 2006 and “lobbied the congressmen in Laguna and Batangas that they either not attend the hearing or they vote against the passage of the bill,” said another UPLB source, whose office is in charge of the university’s records.

“I don’t know what the press release was back then, but that’s how it happened. The fear now is if Binay wins [the presidency in 2016], it would be too easy for them [to effect the takeover],” the second source said.

“That’s over,” he said, but would not comment further.

“They’ve been trying to outsmart UPLB for several years already,” said another source who used to hold a second top university post, but declined to be named for fear of compromising his position.

“Imagine, a hotel and cell site were built without permit [from the university],” the source said.

He was referring to the BSP International Makiling, a four-story hotel constructed on Makiling, and a Smart telecommunications tower in 2009.

Mercado earlier said the hotel, which costs P60-65 million, was built with funds from the BSP. A BSP source said the hotel costs P150 million.

The first UPLB source said talk among Makiling officials when the hotel was being constructed was that Binay planned to build a “world-class tourism site.”

“They’re not using it for scouting anymore. They’d bring in youths from Makati and the government employees here instead,” the source said.

But JR Pangilinan, regional director of the BSP’s Asia-Pacific scout committee, denied that Binay attempted to take full control of the jamboree site.

“The request was for the BSP to be given autonomy to administer the entire property,” Pangilinan said in a statement sent through Binay’s spokesperson Joey Salgado.

He clarified that the proposal for the BSP’s autonomy came from the national executive board and the national council of the BSP, and not from the Vice President.

The national council is the highest policy-making body of the BSP.

“[The] BSP and [the] UPLB are very close allies in education and youth development. This issue is not a serious concern for the two institutions and will not affect their strong ties and partnership,” Pangilinan said.

He said the university, which administers the entire Mt. Makiling Reserve, had even agreed to provide additional areas for the BSP as camping ground because of the increasing membership of the organization.

“It is [the] BSP’s hope that the institution be spared from politicking and allowed to concentrate on its vision for our youth,” Pangilinan said. With a report from Niña P. Calleja in Manila