DUBAI—Saudi Arabia has arrested a prominent campaigner for women’s rights for insulting Islam, activists said on Saturday, accusing authorities of trying to crush all dissent.

Suad al-Shamari, a co-founder of a liberal human rights group, is being held in prison, according to two activists who did not want to be named.

Shamari recently posted pictures on Twitter of a man kissing the hand of a long-bearded Islamic cleric.

She commented on his beard and said: “Notice the vanity and pride on his face when he finds a slave to kiss his hand.” 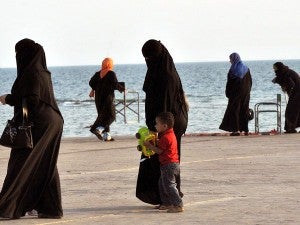 A maid carries a folding chair for waiting Saudi women along the sea front in the Red Sea coastal city of Jeddah. AFP FILE PHOTO

In another tweet last month, she said she had been called “immoral and an infidel because I criticized their sheiks,” referring to religious or tribal leaders.

She recently appealed to King Abdullah and the interior minister over the case of two women who, she alleged, were arrested by religious police for taking a taxi driven by a man.

Ultra-conservative Saudi Arabia strictly segregates the sexes and women are not allowed to drive, although many do use taxis with male drivers, without incident.

In September a Saudi court upheld a sentence of 10 years in prison and 1,000 lashes for Raef Badawi— who co-founded the Saudi Liberal Network with Shamari—for insulting Islam.

Before Badawi’s arrest in 2012, the network had announced a “day of liberalism” and called for an end to the influence of religion on public life in Saudi Arabia.

“This is the accusation they make against anybody defending human rights,” said one of the activists.

Saudi Arabia’s Interior Ministry spokesman could not be reached for comment.

Saudi women renew push for the right to drive