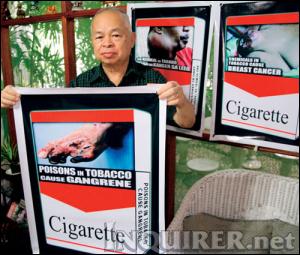 MANILA, Philippines – The tireless dedication to public health of the late senator and health secretary Juan Flavier, particularly his popular “Yosi Kadiri” campaign, was the reason why Filipinos are now enjoying the benefits of a stronger tobacco control environment, a group of cancer survivors and former smokers said Saturday.

“His Yosi Kadiri campaign, the most successful tobacco control drive this country ever witnessed, catapulted a national consciousness about the harmful health effects of smoking. Through his sheer dedication to his job and integrity, Dr. Flavier had defied the strength of the tobacco lobby and launched an anti-smoking program that reached the very core of every Filipino household,” said Emer Rojas, Global Cancer Ambassador and president of the New Vois Association of the Philippines (NVAP) in a statement.

Rojas said Flavier, a known public health champion, pioneered the country’s anti-smoking movement as health secretary and in the Senate as author of Republic Act 9211 or the Tobacco Regulations Act.

“It is because of his strong commitment to public health that many have now come to embrace this cause. The landmark passage of the sin tax and graphic health warning laws were results of Dr. Flavier’s endless pursuit to fight for Filipinos’ right to health,” he added.

Rojas recalled that despite having retired from public service, Flavier issued a scathing remark in 2012 during the sin tax debates after Sen. Ralph Recto proposed to slash by half the P30 billion tax approved by the lower house.

Flavier then scored the committee report of Senator Ralph Recto on the sin tax bill for putting the interests of the powerful tobacco lobby ahead of the health of millions of Filipinos.

Among the many public health campaigns he initiated, his “Yosi Kadiri” was a standout and probably was his launch pad to a Senate seat in 1995.

“Dr. Flavier was the father of public health. He has laid the groundwork for us so that you and I may continue to build up on what he has started and gave his life for. We now enjoy eating at restaurants, riding the jeep, and walking in the street without having to worry about inhaling tobacco smoke because somebody stood up for our right to health. A larger than life person, Dr. Flavier has fully served his purpose. Heaven must be smiling right now as it welcomes God’s good and faithful servant,” said Rojas.

Former Senator Aquilino Pimentel Jr. also extolled Flavier as a “heroic icon in the struggle to inform the public (about) the deadly menace of cigarette smoking.”

“Against tremendous odds, he succeeded in requiring cigarette packets to carry the warning on the toxic effects of smoking,” Pimentel said.

Flavier succumbed to multiple organ failure due to complications from pneumonia at the intensive care unit of the National Kidney and Transplant Institute on Thursday.