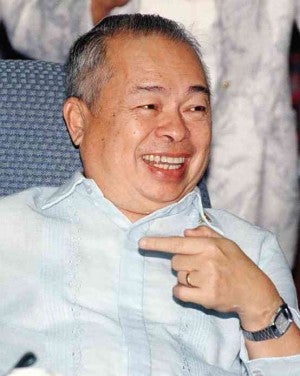 MANILA, Philippines–Juan Martin Flavier, a media-savvy physician whose campaign, using catchy slogans, to bring health care to the impoverished grass roots ranged from antismoking to family planning, died on Thursday. He was 79.

The former secretary of the Department of Health (DOH) and two-term senator succumbed to multiple organ failures as a result of pneumonia while confined at the intensive care unit of the National Kidney Transplant Institute in Quezon City, where he was admitted on Sept. 10, according to son-in-law Roby Alampay.

Malacañang issued a statement joining the people in mourning the death of Flavier.

“As a public servant, he championed the cause of countryside development and upgrading the quality of public health care,” Communications Secretary Herminio Coloma said. “He served with integrity and endeared himself to the people by dint of his humility, simplicity, jovial character and common touch. Truly, he was an exemplary Filipino leader.”

Popular and well-loved, the diminutive Flavier was regarded as a giant in government and politics since he joined public service in 1992, when he was enlisted by President Fidel Ramos, until his retirement in 2008.

A man of zeal and contagious joy, he easily became the most popular secretary in the Ramos cabinet. He gave the nation a lot to cheer about, besides his disarming smile and sense of humor—like programs for AIDS awareness, immunization for rebels, vitamin-fortified rice, breast-feeding, herbal medicine and the planting of the backyard wonder called malunggay.

His famous battle cry “Let’s DOH it!” became part of everyday language and helped make his agency a dynamic and popular arm of the Ramos administration.

Born on June 23, 1935, in Tondo, Manila, Flavier grew up in Baguio City. He earned his degree in medicine from the University of the Philippines in 1960. In 1968, he went abroad to study management accounting. He also took a course in communication from Michigan State University. In 1969, he obtained his Master’s in Public Health from Johns Hopkins University.

As health secretary from 1992 to 1995, he initiated many popular projects, including organizing Barangay Health Workers, the “Doctors to the Barrios Project,” which encouraged young physicians to serve in poor villages, the “Oplan Alis Disease,” which educated people about preventive rather than curative measures, the “Sangkap Pinoy,” which is a nationwide campaign against micronutrient malnutrition, and the “Yosi Kadiri,” an antismoking campaign.

A brilliant communicator, the jovial doctor did not only make plans for the nation’s health but, with boundless energy, made sure these were realized. His “Yosi Kadiri” was a standout and probably was his launch pad to a Senate seat in 1995.

Among his most controversial crusades were championing family planning and AIDS prevention programs.

Some of the landmark legislation he authored and sponsored were the Traditional Medicine Law, the Poverty Alleviation Law, Clean Air Act and the Indigenous People’s Rights Act. He was re-elected to a second term in 2001 and also served as Senate President Pro Tempore.

In 1993, Flavier was also named Inquirer Filipino of the Year. The Inquirer noted that Flavier provided “a human face to a dull bureaucracy and gave it a voice easily understandable to ordinary people.” The newspaper said his health campaigns were “so well strategized, packaged and presented” that people responded by helping themselves.

Alampay said Flavier died surrounded by his family, including his wife, Susan, their four children and their respective families.–With reports from Nikko Dizon and Inquirer Research