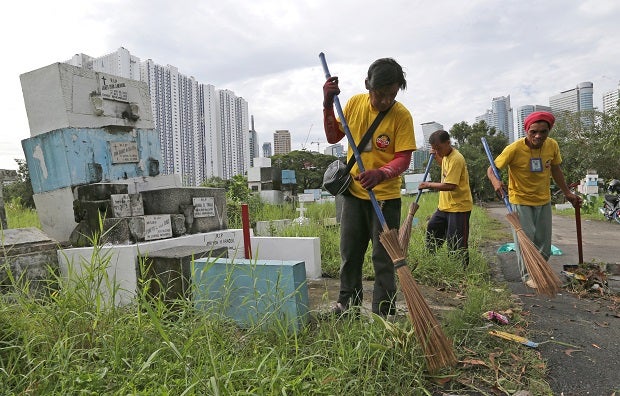 A MMDA worker helps in the cleaning of the Manila South Cemetery as part of their ‘Oplan Kaluluwa 2014’ in preparation for the observance of All Saint’s Day.
INQUIRER PHOTO/RAFFY LERMA

MANILA, Philippines—Environment Secretary Ramon Paje called on city and municipal officials to exercise political will on catching litterbugs in the different cemeteries as the nation commemorates All Saints’ Day and All Souls’ Day.

Paje also urged Filipinos to avoid generating waste as they troop to the memorial parks to pay their respects to their departed loved ones as he cited last year’s yield of nearly a hundred truckloads of garbage from various Metro Manila cemeteries.

In a statement, the environment secretary said, “Let us turn All Saints’ Day and All Souls’ Day into a more meaningful and memorable experience by minimizing waste and pollution in cemeteries.”

He pointed out that “small acts, whether negative or positive, when taken collectively can have such a drastic impact on the environment.”

Paje said that cemetery visitors can do their part in reducing garbage by simply using recyclable containers for food and drinks so they do not “end up in our waterways,” bringing only enough food, using only fresh flowers or potted plants, and cleaning up after themselves.

The environment secretary suggested for local government units, specifically barangays, to deploy teams in the different cemeteries to keep tabs on litterbugs.

“Local government units should exercise political will in enforcing provisions of Republic Act 9003 or the Ecological Solid Waste Management Act. This includes penalizing a person caught littering with a fine from P300 to P1,000, or render community service,” he stressed.

According to a 2013 Metropolitan Manila Development Authority report, some 100 truckloads of trash were collected by the agency from various cemeteries in the capital region.

Apart from reminding the cemetery visitors and local government units to keep the memorial parks clean, Paje said cemetery administrators should strategically set up an adequate number of trash bins that would allow waste segregation.

To address air pollution as the public troops to the cemeteries, Paje said carpooling should be practiced or bigger vehicles should be used to reduce the number of trips of family members to and from the memorial parks.

He likewise suggested for motorists to avoid peak traffic hours, park a good distance from the cemeteries to lessen congestion in the areas, and to make sure vehicles are well-maintained.