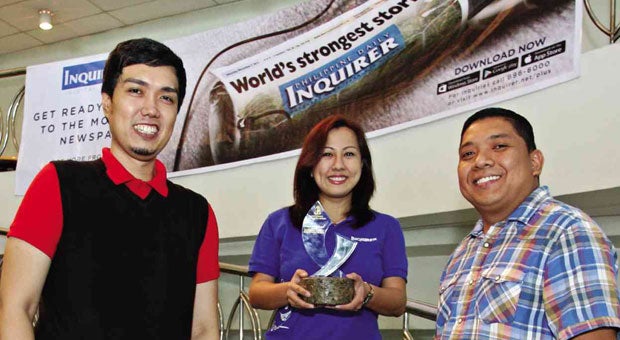 The Inquirer was unopposed in the Best News Coverage category for print, in which two of its major news coverages last year—Super Typhoon “Yolanda” and the Ayungin Shoal standoff—were nominated.

Yolanda (international name: Haiyan), which swept across central Philippines on Nov. 8 last year, now ranks as the worst natural disaster to hit the country and one of the strongest typhoons to hit land on record globally.

The Inquirer’s coverage of Yolanda also won honors in the Society of Publishers in Asia (Sopa) 2014 Awards for Editorial Excellence.

“Meeting a Monster,” Yap’s “vivid, impassioned, heart-rending and tragic” account of his experience in covering Yolanda, won an Honorable Mention for Excellence in Feature Writing.

It was the first time for the Inquirer to win an award in the feature writing category. Since 2003, the paper has collected 12 Sopa awards, including awards for excellence in specialized reporting, opinion writing, and the scoop, as well as honorable mention in breaking news, investigative reporting and news photography.

In May, Yap, Inquirer photojournalist Niño Jesus Orbeta and Inquirer Visayas correspondent Joey Gabieta were among the 20 journalists and members of their team who were honored at the Super Awards for their bravery and dedication while covering Yolanda.

Yap’s heart-wrenching story of a school teacher who survived the flood because her daughter pleaded with her to save herself by letting go of her hand became one of the Inquirer’s most viral reports, with at least 1.5 million views and shares.

The SM S.U.P.E.R. (Salute to Unparalleled People, Endeavors and Resources) Award was sponsored by the SM Foundation Inc., the corporate social responsibility arm of the SM Group of Companies.

In the CMMA, the other finalist for Best News Coverage was also an Inquirer report on the Ayungin Shoal standoff between a Philippine civilian supply vessel and a Chinese Coast Guard cutter in the West Philippine Sea on March 29. It was written by Dizon.

Also unopposed in the Best Editorial Cartoon category, the Inquirer’s Gilbert Daroy won for his entry “The New Pope.” Daroy’s other entries, “The Napoles Affidavit” and “The Curious Ways of Mayor Duterte,” were also nominated in the category.

The CMMA are given to reward as well as to pay tribute to media projects that enhance the total development of the Filipino audience through competent and professional use of mass media techniques. It aims to promote the basic human values—love of God, love for truth, love of life, respect for the natural environment and promotion of positive Filipino values.

The Inquirer also received nominations in other categories.

Two of the Inquirer’s special reports—“The Napoles Pork Barrel Scam” by Nancy Carvajal and TJ Burgonio; and “Special Report on San Miguel Corp. and Fr. Fernando Suarez” by Daxim Lucas, Jocelyn Uy, Erika Sauler and the writer—were among the finalists in the Best Investigative Report category.

Carvajal’s series of reports on the investigation into the

The investigation has led to the filing of plunder and graft charges against Senators Juan Ponce Enrile, Jinggoy Estrada and Bong Revilla, businesswoman Janet Lim-Napoles and several former and current government officials.

Also as a result of the exposure of the pork barrel scam, party-list and activist groups challenged the legality of the PDAF in the Supreme Court. The court found for the petitioners and declared the pork barrel unconstitutional.

Despite the Supreme Court ruling, the pork barrel remained in the 2014 budget. Critics claim it still exists in the 2015 budget in the form of lump-sum appropriations.

The government’s and the legislature’s refusal to scrap the pork barrel has compelled the Catholic Church to lead a signature campaign for the abolition of the graft-ridden political-patronage fund.

In June, Carvajal was named the most outstanding journalist of 2013 by the Center for Media Freedom and Responsibility during the Jaime V. Ongpin Journalism seminar for breaking the story of the plunder of the pork barrel “by a conspiracy of unscrupulous individuals.”

In the Sopa Awards, Carvajal was a finalist in The Scoop category for “They laughed while firing,” part of her series of exclusive reports on the shooting of a Taiwanese fisherman by Philippine coast guards in Balintang Channel on May 9 last year.

In the CMMA, two Inquirer photographers were nominated in the Best News Photograph category. Marianne Bermudez was a finalist for her photo “High-Wire Act for Pupil,” while Raffy Lerma was nominated for his photos captioned “Optimism” and “Yolanda Should Fear My God.”

Inquirer columnist Minyong Ordoñez was among the finalists for the Best Opinion Column category, while the Junior Inquirer was nominated for Best Children’s Magazine category.

The CMMA also conferred a posthumous Serviam Award on the late broadcast journalist June Keithley Castro, a known Marian devotee who played a vital role during the crucial hours of the Edsa People Power 1 that toppled the dictator Ferdinand Marcos from power in February 1986.

The Serviam Award, separate from the CMMA for media communicators, was created in 2004 in honor of CMMA founder Jaime Cardinal Sin to recognize institutions and individuals who effectively transmit Christian values in media-based programs and projects.

The award, named after Pope John Paul II, who was known as one of the world’s greatest communicators, is given to a group or a person who uses the mass media in creative ways in his evangelical service.

Citing this year’s CMMA theme, “Communication at the Service of an Authentic Culture of Encounter,” Manila Archbishop Luis Antonio Cardinal Tagle encouraged journalists and institutions “to strive to bring about a genuine human encounter where, sharing our insights, sentiments and faith convictions, we may support and cooperate with each other in building a world where the Kingdom values of justice and love reign.”–With a report from Inquirer Research

Read Next
Public urged: Don’t litter in cemeteries
EDITORS' PICK
Smart offers wireless fiber-like speeds to Filipino homes with country’s first 5G Prepaid Home WiFi
House OKs bill allowing married women to retain maiden surname
Pandemic prognosis: Where does it go from here?
This new condo in the South will make you want to turn a new leaf
Legarda: Ending Violence Against Women, a cause for all
Google won’t accept election ads for 2022 national polls
MOST READ
Bongbong Marcos to face another disqualification case
Christine Bersola, Julius Babao cleared of cancer after colonoscopy, endoscopy
Former PM Abe says Japan, US could not stand by if China attacked Taiwan
Tropical storm intensifies as it approaches PAR
Don't miss out on the latest news and information.