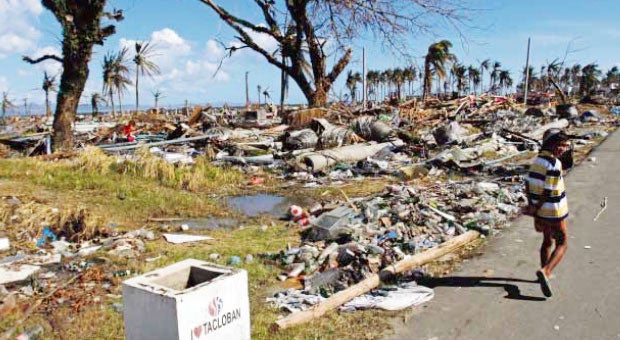 THE HAUNTING Those who died in this area of San Jose district, Tacloban City, the worst hit during Supertyphoon “Yolanda,” swarm with “voices crying for help,” strange footsteps, dogs eerily howling, the dead walking, according to residents there. RAFFY LERMA

The woman turned out to be one of the more than 400 people who died in Sitio Alimasag when the entire area was wiped out by storm surges spawned by the strongest typhoon to make landfall.

Avanzeña was just one of several residents in Sitio (settlement) Alimasag who claimed to have either seen ghosts or felt the presence of spirits a few days after Yolanda (international name: Haiyan).

The 24-year-old driver said that on Feb. 16, a woman disembarked from a jeepney, boarded his pedicab and asked to be taken home, just a few meters away from his own house.

They talked during the five-minute ride. Their topic was the devastation caused by Yolanda.

Before disembarking, the woman gave him P10 for fare and went inside the house.

The next day, Avanzeña asked his father if he knew the woman who lived near their house.

“My father told me that woman, whom he identified as Alice Magdua, was among those killed during the typhoon and remained missing up to this time,”Avanzeña said.

The experience had so shaken him that he didn’t work for almost a week.

When he resumed work, Avanzeña made sure that he was home before 8 p.m.—the time when he “met”Magdua.

Another resident of the village, Jamie Salode, 19, said she thought she also saw Magdua on a night in February.

Salode said she was sitting by the window when Magdua passed by. “Before I saw her, the dogs started to howl as if they had seen something or somebody,” she said.

Magdua’s house was located off a road from the main street of Barangay (village) 88. Salode’s house lies near the entrance of the sitio.

Other residents of Barangay 88 claim to have seen ghosts or felt the presence of spirits.

San Jose is considered the worst-hit area in Tacloban, where more than 1,000 people died during storm surges spawned by Yolanda. At least 400 of them were from Sitio Alimasag.

“It was frightening and the hair on our backs would stand every time we heard the dogs howl. This would usually begin at midnight until the wee hours of morning. We could not sleep,”Versoza said.

There were times when they heard “voices”asking for help.

“There was nobody outside but we could hear people shouting, asking for help and crying,” said another resident, Alfreda Ilo, 49.

“Sometimes, we would hear footsteps coming from different directions. We just prayed and waited for all of these to stop,”she added.

‘Leave us in peace’

The same thing happened in nearby Sitio Payapay, also in San Jose district.

Loregilyn Baynaco, 27, and mother of two children aged 9 and 5, said the dogs would howl at night, followed by strange voices.

“It was scary. We could hear these voices just close to our tents. We could not sleep and would just pray and ask the spirits to leave us in peace,” she said.

Security guard Raymund Barbosa, 21, claimed he saw a man in one of the classrooms in Leyte Colleges, also in San Jose district, while doing his nightly rounds in February.

“He was just sitting there and then he vanished,”Barbosa said.

Barbosa said at least three bodies were found on the school grounds after the onslaught of Yolanda.

The lack of power supply at that time made Barangay 88 more eerie. But the screams, cries and voices subsided when power was restored in Barangay 88 in March.

The residents said they could still hear and feel the spirits’ presence but not as much as before.

Spiritualist Marcial Martinez said it was not surprising that some people would see or feel the spirits after the onslaught of the super typhoon.

“These people died unexpectedly during Yolanda and they could not accept that they had died,” he said.

Martinez, 60, lives with his wife, Virgie, and daughter Marian inside the Tacloban public cemetery in Barangay El Reposo, where around 50 people who died during the super typhoon were buried.

These spirits need prayers so they can find peace, said Martinez.

He said these spirits usually roamed on Tuesdays and Fridays—the days when Catholics recite the Sorrowful Mystery when praying the rosary.

“In death, they are distressed. They don’t want to leave yet. But if we continue to pray for their souls, they will stop their visits,”Martinez said.

Fr. Amadeo Alvero, spokesman of the Archdiocese of Palo, agreed with Martinez, saying offering prayers would help these “unsettled spirits” to leave the earthly world.

“Perhaps the souls of many who died during Yolanda are asking for our prayers. For indeed, they need our prayers,” he said.

Alvero asked the faithful to remember those who perished during the super typhoon on All Souls’ Day on Nov. 2 and on Yolanda’s first anniversary on Nov. 8.

“Let us pray for their eternal repose,”Alvero said.

A mother’s sad graduation in Tacloban, other stories

Tacloban: A view to our death