The portrait of a smiling Juan Flavier displayed at his wake in the Church of the Risen Lord in Quezon City is the image that will stay with the family of the former senator and health secretary.

“We have (that picture) in the dining room. So every time we eat, he (would be) smiling down at us,” Flavier’s wife Alma Susana Aguilar said on Friday.

Considered the poorest senator during his two terms from 1995 to 2007, Flavier had only one indulgence and that was food, his daughter Joy said.

“We have a running joke that (wiretappers) would not get any information from him other than ‘what’s for dinner?’” she said. 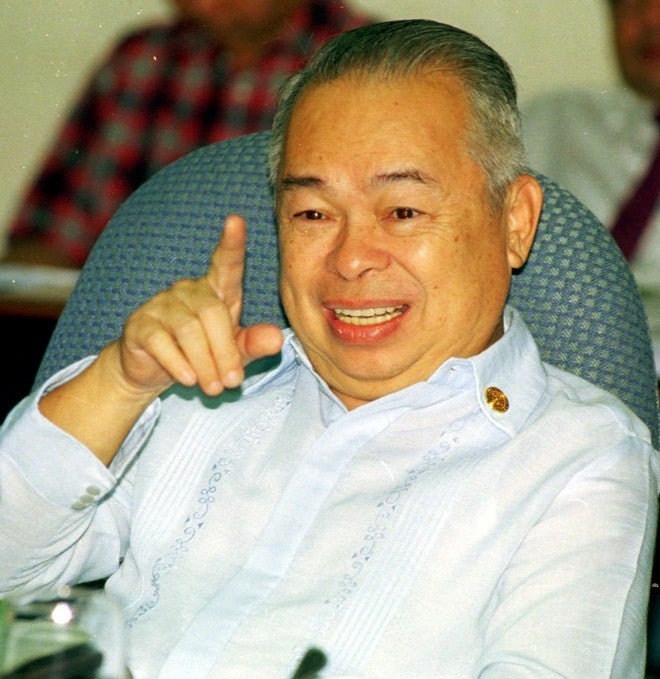 She recalled that no matter how busy Flavier was as a senator, he would always come home to be with his family for dinner. Her father was happy eating rice with any viand and enjoyed rice cakes and camote for merienda, she added.

President Benigno Aquino III paid his last respects to Flavier on Friday night at the chapel in UP Diliman, where a 7 p.m. Mass was officiated by Fr. Jett Villarin, SJ.

Former President Fidel V. Ramos visited the wake on Friday and recalled how he asked Flavier to be his health secretary in 1992.

“I called him and he said, ‘Mr. President, you do not know me.’ I said, ‘I know you because I was your student on how to make sanitary toilets,’” Ramos said of the former president of the Philippine Rural Reconstruction Movement and the International Institute of Rural Reconstruction.

But Flavier countered that he was “just a barrio doctor,” to which Ramos said, ‘That’s exactly what we need for the Philippine health system.’ ”

After three years as health secretary, Flavier was asked to join the administration’s senatorial ticket. That was when Flavier asked him, “Don’t you like me anymore?” Ramos recounted.

“No, you’re doing a good job,” Ramos had responded. “But you must stay longer in the Senate and make permanent policy through legislation,” the former Philippine President said.

Roby Alampay, Joy’s husband and Flavier’s son-in-law, recalled that grandchildren were the “biggest thing” for the well-loved official when he retired.

“When his grandchildren were around, everything else was extra,” he said.

“He encouraged them to talk. He was a very good listener,” Flavier’s wife added.

The Ramos Cabinet member, who was known for his sense of humor, was fond of puns and funny stories and would watch the comedy show “Mr. Bean” with his grandchildren.

“He genuinely appreciated them. More importantly, he knew it was what people watched. He understood that you have to speak their language. He could speak basketball and telenovela and (that) really helped him,” Alampay said of Flavier who was considered a great communicator.

Flavier was away “most of the time,” his daughter Joy said. “But he made sure to send us postcards and handwritten letters,” she said of the late senator who used to bring his children to bookstores and encouraged them to become voracious readers.

Flavier’s wife Susan recalled that she met Flavier in a philosophy class at the University of the Philippines. “He was a very bright student. He was always called upon to explain (the lesson) to us. And I noticed that every time he went in front (of the class), he would always be looking at me.”

“Even if he was short, he was always happy,” Flavier’s wife said. “And he prayed a lot. He would say, ‘Mommy, if you have problems, bring it to the Lord in prayer.’”

But when it came to public policy and politics, Flavier was more pragmatic, Alampay said.

“He compromised, he negotiated, he knew how to give and take,” he said.

“He knew that in the laws he had passed, he had to give up some things, sometimes to the disappointment of his constituents,” Alampay said.

“He would tell us: ‘It’s not a perfect world and we have to keep moving forward. At the end of the day, I would rather be at point B rather than still stuck at point A. Then we move forward again from there,’” Alampay recalled Flavier saying.

The country lost a statesman, while he lost a “dear friend,” Senate President Franklin Drilon said. “He was a doctor who shunned the lure of a financially rewarding private practice to be a ‘Doctor to the Barrios (DTTB),’” he added.

Sen. Loren Legarda agreed: “Perhaps (Flavier’s) greatest achievement was bringing healthcare to rural areas so that it serves the marginalized and the unempowered.”

In 1993, after learning that close to 300 towns in the Philippines had no doctor, the former health secretary launched the DTTB program to encourage doctors to serve the country’s poorest and most remote villages.

Speaker Feliciano Belmonte Jr. distinctly recalled Flavier aggressively pushing for the controversial reproductive health bill when the House of Representatives debated on it in 2010.

Former Sen. Aquilino Pimentel Jr. also extolled Flavier as a “heroic icon in the struggle to inform the public (about) the deadly menace of cigarette smoking.”

“Against tremendous odds, he succeeded in requiring cigarette packets to carry the warning on the toxic effects of smoking,” Pimentel said.

Former Sen. Ramon “Jun” Magsaysay Jr. recalled an anecdote about Flavier that showed his “honesty and lack of materialism.”

“When I visited him and wife Susan in their house in Tierra Pura, I was pleasantly surprised at how simple and unpretentious their house remained. It must have been the same house they owned since the ’60s,” Magsaysay said.

Flavier’s remains will be brought to the Department of Health in Manila on Tuesday for a morning service, and will be cremated afterwards.

The former senator, who passed away at 79 on Thursday, was “an exemplary Filipino leader,” Malacañang said in a statement.

He served “with integrity and endeared himself by dint of his humility, simplicity, jovial character and common touch,” Communications Secretary Herminio Coloma said.