Thousands living among the dead 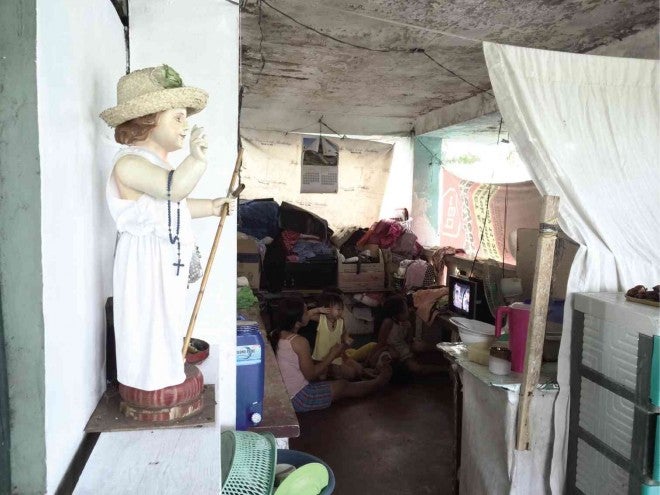 THE CHILDREN of caretaker Noel Sanchez watch TV on the second floor of a family mausoleum they are taking care of in the Manila North Cemetery. NATHANIEL MELICAN

MANILA, Philippines—Without the tombs, it looks like just another barangay, complete with a curfew and an ID system soon.

For decades, an increasing number of the city’s poorest have been allowed to live among the dead in the 57-hectare Manila North Cemetery (MNC). A record system initiated only this year currently lists around 2,000 informal settlers, but the actual population may be triple that number.

They are the reason why even on ordinary days, in between observances of All Saints’ Day, the public cemetery can actually be such a lively place, with radio music coming from mausoleums or small stores operating year-round along the streets and alleys. Last year, the family of the late Manila Mayor Arsenio Lacson was shocked to find ducks being raised next to his tomb.

“Our policy is that we let them stay here as long as they follow the rules and live peacefully,” Willy Lazaro, head of MNC security, told the Inquirer in an interview. “At present, there is no order from the administrators or city government to evict them.”

The residents are mostly listed as caretakers hired by the families of the dead whose tombs or mausoleums now serve as the caretakers’ home.

Patricia Marquez, 66, moved in in 1977 after the house her family was renting in Caloocan City was destroyed by fire. “We didn’t have anywhere else to go, until we found this place and decided to stay,” she said.

The family of six—which includes Patricia’s husband, their son and his wife, and two small grandchildren—found a roof over their heads in a space just wide enough to fit a king-size bed. But instead of having a real bed, they sleep on two granite tombs.

They use a car battery to power a small TV set and a DVD/MP3 player. There is a clock and other personal stuff placed on a ledge meant for candles and flowers for the departed. The youngest family member—a boy of 4—sleeps on a hammock.

The neighboring tomb serves as their home’s extension, where they store water, wash clothes and do the dishes—and also keep maya birds in a cage. “We buy the water we drink, but for bathing and washing we draw water from the wells around the cemetery,” Marquez said.

The family that got them to take care of the tombs pays them P600 a year, she said. “Definitely not enough, so my husband and our son work in a warehouse in Valenzuela City.”

A few tombs away lives Ryan Katigbak, who at age 23 struggles to raise three small daughters. Like him, the girls were born in the cemetery.

Katigbak inherited the caretaking job from his grandparents, but he also earns extra from making tombstones or driving a tricycle outside the cemetery.

“Of course, we want to get out of here. But with the money I make now I can’t even think of moving out to rent another place,” he said.

There are also “part-time” caretakers like Noel Sanchez, 42, whose family has a house in Quezon City but stays at the cemetery on weekends and on the days leading to All Saints’ Day. “Cleaning the graves can be tiring, so we just stay here on those days.”

When the Inquirer saw them last week, Sanchez, his wife and their three small children reoccupied a two-story mausoleum —which on the outside looks more like a middle-class house. They brought a 14-inch TV, an electric fan, beddings and their pet dog. For a thorough cleanup, they even used a bunot or coconut husk to polish the floor on the upper level.

“I got this [job] from my mother-in-law who died seven years ago. She used to be the caretaker of this place and several other graves,” he said.

They may wish to be doing something else, but Marquez, Katigbak and other MNC residents agree that living among the dead has certain benefits.

For one, “you don’t have to worry about rent,” Marquez said. “And it’s quiet and peaceful here; no crimes, no chaos, unlike living outside.”

From time to time, there would be rumors going around about government plans to have them evicted. “But the present administration has been good to us. They let us stay as long as we live peacefully,” she said.

The current MNC administrator, Daniel Tan, was appointed to the post by Manila Mayor Joseph Estrada in June this year.

Lazaro confirmed that there would be no evictions anytime soon but that measures were being put in place to prevent more “outsiders” from moving in.

“Since early this year, we have been getting the names of the residents and setting up a database. Each of them should have an ID by January 2015 because they will need it to be allowed to enter at night. After 10 p.m., we close the gates,” the MNC head of security said.

Such measures are deemed necessary since the past few years have seen an increase in the number of residents, many of whom may not be tomb caretakers at all, but were able to find or build homes in the cemetery practically overnight.

Residents without IDs by January would be candidates for eviction, Lazaro said. “There are now so many of them inside that it is so difficult to remove all of them at this point. And the city government must also provide a relocation site and a budget for the entire process, both of which we don’t have yet.”