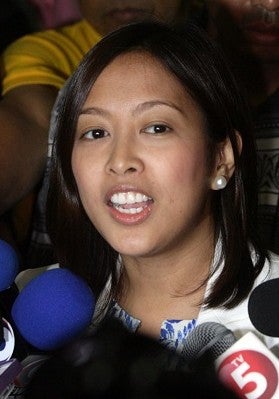 MANILA, Philippines–A daughter of Vice President Jejomar Binay did file in the House of Representatives in 2011 a bill that sought the transfer of control over a 57.7-hectare property on Mt. Makiling from the University of the Philippines Los Baños (UPLB) to the Boy Scouts of the Philippines (BSP).

But Makati Rep. Mar-len Abigail Binay withdrew the measure, House Bill No. 04325, because UPLB officials offered a different site to the BSP.

“During the committee hearing [in the] 15th Congress, the bill was withdrawn because I was informed by J.R. Pangilinan that UPLB was offering a different site so there was no need to pursue the bill,” Binay said through her father’s spokesman, Joey Salgado.

J.R. Pangilinan is the regional director of the BSP’s Asia-Pacific scout committee. He denied on Saturday that the Vice President tried to take full control of the Makiling property.

Binay made the statements after UPLB sources said the Vice President, through his allies in Congress, had made attempts to wrest control of the Mt. Makiling lot that the BSP was leasing from the state university.

Salgado forwarded a text message from Representative Binay’s chief of staff Mysty Mendoza, who said that “based on records, it was in the 15th Congress when we filed HB 04325.”

“It remained pending [on] the committee until the end of [the 15th] Congress. We didn’t actively push for the [bill] since there were objections. [In the] 16th Congress, we didn’t refile the bill,” Mendoza said in her text message to Salgado.

A check of the House of Representatives’ website showed that Representative Binay filed HB No. 04325 on March 3, 2011. The bill was titled “An Act vesting the BSP with control, jurisdiction, and administration of a parcel of land located at Mt. Makiling, Los Baños, Laguna, to be known as the ‘BSP Jamboree Site,’ and for other purposes.”

Binay’s measure was referred to the House committee on government enterprises and privatization on March 9, 2011.

The bill would put the BSP jamboree site on the 57.7-ha property on Mt. Makiling.

“Given the historical importance and significance of [the] Mt. Makiling Forest Reserve to the BSP and its role and meaning to the scouts internationally, it should be deemed rightful for these boy scouts to seek to reserve part of this site for themselves so they may use and preserve [it],” Binay said in her proposal.

In her statement sent through Salgado, Binay said another bill that she filed in 2012 for a BSP charter “did not discuss, make mention of the property” on the UPLB campus. She said the bill was “purely about [the BSP] charter.”

That bill was titled “An act instituting the BSP charter, defining its objectives, power and functions, repealing for the purpose Commonwealth Act No. 111, as amended.”

“I did not refile the BSP charter [bill in] this Congress, but it was done by Rufus Rodriguez,” she said.

A check of the House website showed that Binay’s bill has been pending on the House committee on government enterprises and privatization since July 24, 2012.

Rodriguez filed a bill similar to Binay’s and it has been pending on the committee since May 5.