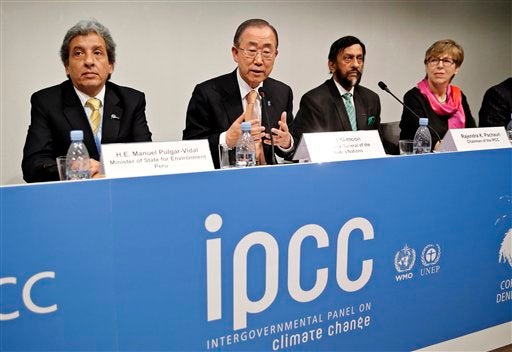 Presenting a report on climate change, with from left, Minister of State for Envionment of Peru Manuel Pulgar-Vidal, UN Secretary General Ban Ki-moon, Chairman of the IPCC Rajendra K. Pachauri and Secretary of the IPCC Renata Christ, present a comprehensive report by the UN climate panel, summarizing the three interim reports previously released on climate changes, Sunday Nov. 2. 2014, at Tivoli Congress Center in Copenhagen, Denmark. France and the United States headed a chorus of alarm on Sunday after a major UN report on climate change warned that the Earth was on track for potentially disastrous global warming. AP PHOTO/POLFOTO, JENS DRESLING

PARIS–France and the United States headed a chorus of alarm on Sunday after a major UN report on climate change warned that the Earth was on track for potentially disastrous global warming.

France, which is hosting a UN conference in December 2015 that is supposed to seal cuts in greenhouse-gas emissions, said the report required “immediate, all-round mobilization.”

“The message from this report is clear,” the foreign ministry and environment ministry said in a joint statement.

“The 2015 Paris agreement has to provide a political response that is in line with the science.”

In Washington, US Secretary of State John Kerry said the report was a fresh warning–“another canary in the coal mine.”

“Those who choose to ignore or dispute the science clearly laid out in this report do so at great risk for all of us and for our kids and grandkids.”

The report, published in Copenhagen, is the final chapter in an overview on global warming and its impacts by the Intergovernmental Panel on Climate Change (IPCC).

The first such assessment since 2007, the overview has been published in a trio of volumes over the past 13 months.

The report issued on Sunday was an encapsulation of what they said.

But it carried special weight, given its language and timing, coming ahead of the Paris talks and a preparatory session taking place in Lima from Dec. 1-12.

“With every IPCC assessment, those risks have become clearer and more sobering, as have the likely impacts on lives, livelihoods and the health of our world now and for generations to come,” said Christiana Figueres, heading the UN Framework Convention on Climate Change (UNFCCC).

But, on current trends, said the IPCC, the Earth’s average surface temperature is likely to exceed 4 C by 2100, worsening the peril of flood, drought and land lost to rising seas and storm surge.

Reaching the 2 C limit safely would mean cutting annual greenhouse-gas emissions by 40-70 percent by 2050 compared with 2010, and to near zero or even below by 2100.

“Renewables and the smart use of energy are the quickest and cleanest ways to cut emissions,” said Greenpeace’s Kaisa Kosonen.

“Any technology that ‘handles’ emissions rather than replaces fossil fuels is like smoking crack to solve an alcohol addiction.”

“The risks are clear,” said Alden Meyer of the US group the Union of Concerned Scientists (UCS).

“Thankfully, many leaders are finally waking up to the costs of dealing with runaway climate change that scientists have been warning about for years.

“Now they must move quickly to take action at home, and work together to reach an ambitious and equitable climate agreement in Paris.”

British economist Nicholas Stern, author of a 2006 report that unveiled many of the options for tackling greenhouse-gas emissions, said the moment was ideal for a carbon transition.

“Now is the time, with very low interest rates and unemployed resources, to invest in the growth story of (the) future, and manage the great transformations in energy systems, urban planning and land use.”

But some business voices also said governments had to end uncertainty and inequality in their policies.

“If we are to unlock the scale of change that we need, we must have a level of policy clarity equal to this scientific clarity,” said Philippe Joubert of the Prince of Wales’s Corporate Leaders Group, gathering European business chiefs and policymakers.–Richard Ingham