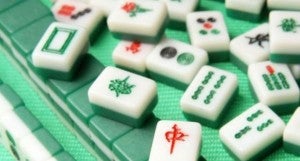 BEIJING–The ancient Chinese game of mahjong became the latest extravagance to be condemned in official media Tuesday, as a writer in the Communist party’s mouthpiece newspaper urged government personnel to shun the pastime.

Chinese people have been clacking mahjong tiles for centuries, with some accounts naming its inventor as the ancient sage Confucius. But some officials have taken their hobby too far, according to a commentary in the People’s Daily.

“The phenomenon of Communist officials going to rural retreats to have fun, play mahjong and poker… must resolutely stop,” the commentary said, referring to the widespread practice of betting on games “to add a little stimulation”.

The article called for an equally “resolute” end to government staff “spending public money to visit historical sites in the name of ‘study’, and then simply going to any old fun place”.

The commentary was the latest in a series of state-issued broadsides against official extravagance, as China’s President Xi Jinping attempts to improve the Communist party’s image in response to widespread anger over endemic corruption.

Chinese officials have held secret sauna parties and been hiding alcohol in plastic water bottles as they seek to get around a crackdown on extravagance, the People’s Daily said last year.

“Constant reports of saunas held at farm houses” were evidence of a growing culture of “low key extravagance” that was damaging the new president’s anti-corruption campaign, it added.

The Chinese government on Monday issued a ban on private clubs in historical buildings and parks, which are often frequented by officials, state-run media reported.

The campaign against graft has been blamed for falling sales of luxury items, and hit business at expensive hotels and restaurants, according to reports.

Critics argue that party controls over China’s media and courts limit the effectiveness of anti-corruption campaigns, which have often been announced by incoming Chinese leaders in recent decades.