Hawaii lava forces residents to get ready to flee 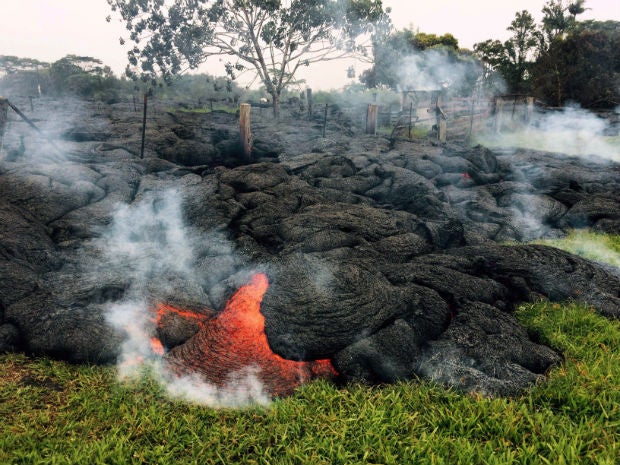 This Oct. 26, 2014 photo provided by the U.S. Geological Survey shows the lava flow from an eruption that began June 27, as the front remains active and continues to advance towards the northeast threatening the town of Pahoa on the Big Island of Hawaii. AP

Hawaii officials will make arrangements for those living in the path of a lava flow to watch the destruction of their homes.

That accommodation is being made to “provide for a means of closure,” Hawaii County Civil Defense Director Darryl Oliveira said Monday. “You can only imagine the frustration as well as … despair they’re going through.”

Dozens of residents have been told they might have to evacuate as lava from Kilauea heads toward their homes.

The lava was about 100 yards (91 meters) from a home Monday morning, officials said.

After weeks of fitful advancement, the lava crossed Apaa Street on Sunday in Pahoa Village, considered a main town of the Big Island’s isolated and rural Puna district. It was getting dangerously close to Pahoa Village Road, which goes straight through downtown.

Here’s a look at the volcano, which has been continuously erupting since 1983:

The flow advanced about 275 yards (251 meters) since Sunday morning, moving northeast at up to 15 yards (14 meters) per hour.

The lava’s advancement slowed early Monday, while the flow continued to spread out, according to the Hawaiian Volcano Observatory. The fastest advancing lobe was about 110 yards (100 meters) wide and about 620 yards (567 meters) from Pahoa Village Road at about 7:30 a.m.

Those living downslope of the flow are under an evacuation advisory. Most residents have found places to go or have already left on their own.

Scientists began warning the public about the lava on Aug. 22. The warning came as residents were cleaning up from a tropical storm that made landfall over the Puna district, toppling trees and knocking out electricity.

The lava has advanced and slowed as residents waited, watched and worried.

Kilauea volcano has been erupting continuously since 1983. Most lava from this eruption has flowed south, while the lava has flowed to the northeast over the past two years.

This is not an eruption at the caldera, the things that make for stunning pictures as red lava spews from the mountaintop.

WHO IS AT RISK?

Initially, the lava seemed headed for the Kaohe Homesteads, a widespread, sparsely populated subdivision in the Puna district.

It reached vacant lots in the subdivision before it stalled and then headed toward Pahoa.

Pahoa has small-town, quaint and historic charm, but it’s “the only town in a commercial sense in lower Puna,” said state Sen. Russell Ruderman, who represents Puna and runs a natural food store in Pahoa.

Because the lava could change direction, any community in Puna is at risk. Everyone in the district lives on the volcano. The lush, agricultural district is about a 30-minute drive from the coastal town of Hilo.

Why would someone live on an active volcano? Unlike Honolulu, the state’s biggest city on the island of Oahu, the Big Island’s Puna region still has affordable land and can offer a more rural way of life.

Located on the island’s southeast side, the area is made up of subdivisions that have unpaved roads of volcanic rock that are not maintained by the county.

People live off the grid on solar power and catchment water systems.

Residents know the risks, as there are special insurance requirements to buy land in certain lava zones.

Sporadic suspensions in the lava’s movement gave emergency crews time to work on building alternate routes to town in the event the flow covers the main road and highway.

Crews near the leading edge have been wrapping power poles with concrete rings as a layer of protection from lava heat.

Officials are worried that if lava crosses Highway 130, it will isolate Puna from the rest of the island.

HOW LONG WILL THE RISK REMAIN?

No one knows for sure if the lava flow will stop, change direction or hit homes. It is difficult to predict when the flow will stop or if it will start again from another vent.

In the 1990s, about 200 homes were destroyed by lava flows from Kilauea.

The last evacuations from the volcano came in 2011. One home was destroyed and others were threatened before the lava changed course.

Kilauea is home to Pele, the Hawaiian volcano goddess. Some residents expressed anger at suggestions to divert the flow. They say it’s culturally insensitive to interfere with Pele’s will.

The US Geological Survey says Kilauea is the youngest volcano on Hawaii Island. Officials estimate Kilauea’s first eruption happened between 300,000 and 600,000 years ago.

The lava isn’t a reason to cancel a Big Island vacation because it’s an isolated event, but it also shouldn’t be considered as a sightseeing opportunity.

Officials have warned people to stay away from the area and imposed flight restrictions because of helicopter tours hoping to see lava.

Read Next
Trillanes drops contempt motion against two engineers in Makati carpark controversy
EDITORS' PICK
UK’s Boris Johnson will resign, BBC reports
Unemployment rate up to 6% in May
Geek out at TOYCON 2022 powered by Smart Signature
High inflation: Your P1 is now worth only 87 centavos
High-risk pregnancy: Reducing your risk is in your hands
House energy committee chair Arroyo bats for cheap electricity
MOST READ
Suspect in grisly killing of missing woman in Bulacan arrested
Kim Atienza’s daughter flaunts bikini body in response to critics of her ‘revealing photos’
Number of active COVID-19 cases in PH breaches 11,000
Ex-Defense chief Lorenzana is the new BCDA chair
Don't miss out on the latest news and information.