MANILA, Philippines—State prosecutors opposed the plea of Senator Jose “Jinggoy” Estrada for an All Saints’ Day furlough, saying the detained pork barrel scam suspect also has to show proof of his deceased relatives and friends.

In an opposition submitted before the Sandiganbayan Fifth Division, the prosecution panel said Estrada’s motion should be junked for lack of merit.

It added that granting Estrada’s five-hour pass on November 1 would mean giving the lawmaker special treatment not granted to ordinary detainees. 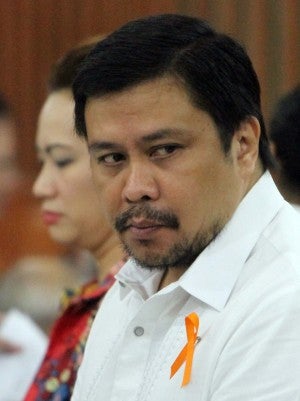 “As a detention prisoner, accused should not be treated differently from all other prisoners who may want to visit the dead and their dearly departed on All Saints’ Day,” the opposition read.

The prosecution also said granting Estrada’s motion might set a precedent that other detainees may also ask for similar pleas.

“Granting his request would unduly create an impression on the public that Estrada, being a high-ranking public official, is a favored detainee over and above other similarly situated detainees… What would now preclude all detention prisoners from claiming that they should be given furlough during Christmas, New Year and even Valentine’s Day?” the opposition read.

The prosecutors even pointed out that the detained lawmaker has not even presented proof that his relatives and friends he listed as his departed loved ones in his motion were actually interred in the specified cemeteries.

“Estrada neglected to present proof that indeed his departed relatives and friend listed and named in his motion were actually interred in San Juan City Cemetery and Heritage Park. Instead, he merely contented himself by providing the names of his deceased relatives and friend, and indicating the places where they were purportedly interred without providing an iota of proof to support his claims,” the opposition read.
In a motion filed before the anti-graft court, Estrada sought a five-hour pass on November 1 for him to visit his grandmother Lola Mary, grandfather Lolo Emilio, father-in-law Reynaldo Vitug, uncles George and Paulino, sister Jessica, as well as his best friend, actor Rudy Fernandez, who died of cancer in 2008.

Estrada, fellow senator Ramon Revilla Jr., and Revilla’s aide Richard Cambe are detained at the PNP Custodial Center for plunder over their alleged involvement in the pork barrel scam.

They are accused of participating in the alleged scheme of using lawmakers’ Priority Development Assistance Funds (PDAF) or pork barrel to ghost projects for kickbacks.

Luy in tears as Jinggoy Estrada lawyer accuses him of forgery