‘Gone Girl’ shows up with bombshell 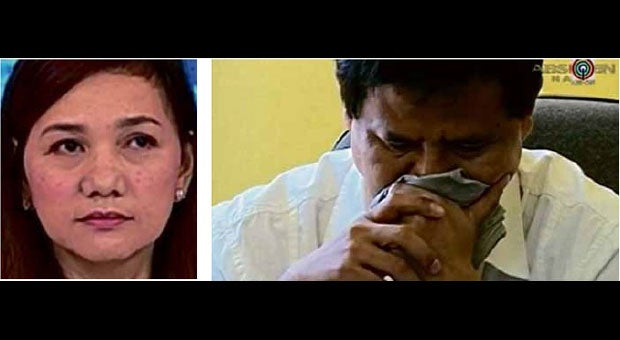 MISSING GOV’SWIFE SURFACES Josefina Tallado says she left her husband CamarinesNorte Gov. Edgardo A. Tallado because she felt her life was threatened. A distraught Governor Tallado clams up after hearing his wife on TV. TV GRAB FROM ABS CBN PROGRAMS “UMAGANG KAY GANDA” AND “TV PATROL”

DAET, Camarines Norte—Surprised by a bombshell on their personal life unraveled on live television by his wife five days after she was supposed to have gone missing, Gov. Edgardo A. Tallado preferred to keep mum about her allegations of infidelity and physical abuses.

Speaking on his behalf, his counsel, lawyer Adan Botor, said the statements of Josefina “Josie” Baning Tallado on ABS-CBN on Wednesday were “apprehensions that have no factual basis and could be better resolved within the family.”

Five days after she was reported missing, Josie, 45, surfaced on Wednesday to tell a sordid story of her husband’s extramarital affair and a wild escape with a friend from a threat on her life.

“I ran away because I know I’m not safe in our home anymore,” she said in the television interview. She was accompanied by lawyer Lorna Kapunan and her friend, Darlene Francisco, 21, a senior psychology student of Ateneo de Naga University.

On Monday, Governor Tallado called a press conference in the provincial capitol in Daet to air concern over the disappearance of his wife and Francisco after she drove her Toyota Fortuner to her friend’s house in neighboring Camarines Sur province on Friday. The sport utility vehicle was found abandoned in Lupi town, Camarines Sur.

The provincial police formed Task Force Josie to investigate the case and search for the two women, and even Interior Secretary Mar Roxas assured assistance in the operation.

“The governor reiterates his appeal to the public to respect the privacy of the matters revealed by Josie on the ABS-CBN morning program,” Botor said, adding that he would rather not comment as these were “family matters” with no direct bearing on his official position.

According to Tallado, he and Josie are both from Labo and were married in 1986. Their first son died in 1987 and their second, Alvin, who was born in 1988, now attends to the family’s construction business.

Kapunan said the governor knew that his wife left their house and that she did not go missing.

“She was traumatized. This is a classic case of battered woman syndrome. She suffered the infidelity of her husband until it led to a death threat on herself and Darlene,” Kapunan said in the TV programs “Headstart” and “Umagang Kay Ganda.”

During the interview, Josie claimed the governor had been having an affair with a 24-year-old woman for two years now, adding that she even saw a sex video of the couple on his phone in the first week of September.

When a nude photo of the mistress was uploaded on the social networking site Facebook two weeks after, the governor accused her of being behind it, Josie said.

On Wednesday, while she and Francisco were having breakfast at home, the governor arrived from a trip in Manila. “Both of you have done something wrong to me,” Francisco recalled him as saying in Filipino.

“When he confronted me, I saw a gun (tucked in his waist). That’s when I felt that he could kill me anytime. In 28 years of our marriage, that’s the first time I saw that kind of anger on his face,” Josie said.

Three days earlier, on Sunday night, she said she had sensed someone entering her room when the governor was still in Manila.

She said she checked out the photo after the confrontation, but when she decided to show it to Josie, it had already been taken down.

“When the governor turned his back, Tita Josie saw the gun and she said, ‘If you want to kill me, shoot me now,’” Francisco said. Instead, she said, the governor took a pair of scissors and cut the wires of the telephone and the Internet router.

“We did not react. When we went to the room where Tita Josie and I were sleeping, the governor followed and asked me to leave them,” Francisco said.

“I didn’t know what happened inside. But my laptop was broken. Tita Josie said the governor smashed it with his gun,” she said.

A silent tension filled the house on Thursday, Francisco said. The next day, she received an anonymous text message saying that the sender was not siding with the governor or his wife, and did not want anything bad to happen to Josie.

The sender warned of a threat to Josie’s life, Francisco said. That led the two women to decide on leaving the house.

On Friday morning, Josie drove her Toyota Fortuner to bring Francisco to her home in neighboring Vinzons town. They were accompanied by a security aide, PO1 Michael Lubiano.

After dropping off Francisco’s belongings at her house, the women left again supposedly to get some snacks, leaving Lubiano behind. The officer reported them missing to the governor when they failed to return past 7 p.m.

No one knew what happened to them until police found the SUV the next day in Sitio (settlement) Trespassing, Barangay (village) Napolidan, Lupi, Camarines Sur, at the boundary of Bicol Natural Park, 45 kilometers from Vinzons. Inside the vehicle were a burned umbrella, spent match sticks and a throw pillow soaked in crude oil.

Josie said she left the SUV in Lupi and rode with Francisco on a motorcycle under heavy rain for two hours going to Naga City. They checked in at a cheap hotel to spend the night.

The following day, Josie, who was carrying P230,000 in cash, bought a secondhand car for P170,000, which stalled in Lucena City so the two spent another night there. They drove to Manila where Josie sought help from a former professor, who referred them to Kapunan.

Soon after she surfaced in media baring threats from her husband, Josie was moved to a safe house and will remain there until she knows what legal action she will take against her husband, Kapunan said.

“She is still traumatized. Her husband is someone who is in power … he is in a position to mobilize his resources,” the lawyer said when reached by phone on Wednesday.

Josie bought a new phone because her three cell phones were taken by the governor, but she received another threatening message in Filipino, “You’re still alive. Why don’t we just continue the plan?”

She also got missed calls from a landline with the area code of Camarines Norte, 054.

Botor said Governor Tallado traveled to Manila on Wednesday to personally reach out to his wife to settle the family’s problem that has been exposed for the public to feast on.

On Tuesday, Tallado told the Inquirer that Josie was not likely to leave his family and try to burn the vehicle she was using and leave it along the road, saying he believed somebody or a group of people was manipulating his wife.

Tallado, in interviews before his wife surfaced, had said he had found nothing wrong with his wife and Francisco leaving together that day because the two women were good friends who had been going around together in out-of-town trips, including a conference of the Junior International Chamber in Cagayan de Oro City a week before they disappeared.

He said Francisco had stayed in their house in Labo for a week upon arrival from Cagayan de Oro City until Josie drove Francisco to her house in Vinzons, about 5 km from Labo.

Tallado said Josie and Francisco would always engage in long talks behind locked doors during her friend’s stay in their house, although he said he never knew what they were talking about.

“It is a fight between husband and wife, who apparently cannot remain together. Infidelity on the part of the guy and fear for her life on the part of the wife,” Kapunan said. She said Josie was planning to file several charges, possibly including concubinage, against the governor.

“It’s a failed marriage. He’s in love with somebody else, let it be. She needs to live her own life,” she added.

Kapunan said Josie had secured a 15-day barangay protection order (BPO) in Quezon City and would seek court protection before the end of the period. A BPO is a relief provided under Republic Act No. 9262, the Anti-Violence against Women and Their Children Act, which is aimed at “preventing further acts of violence against a woman or her child.”

“We need to file [a request for a protection order] in court before the lapse of the 15 days because of the threat on her,” Kapunan said. “Right now, our paramount consideration is her safety.”

“Her protection is not to hide but to tell her story to the public,” the lawyer said.

On Wednesday, Interior Secretary Roxas admitted that the authorities were still at a loss over how to treat the reported disappearance of Josie.

In a news briefing at Camp Crame, Roxas said agents of the Criminal Investigation and Detection Group and the Bicol police were able to monitor Josie’s movement in Manila.

“The reported sightings of the governor’s wife came from very reliable sources. But we could not determine what really happened to her,” he said.–With reports from Tarra Quismundo and Marlon Ramos in Manila