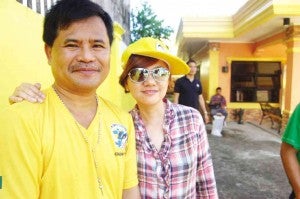 MANILA, Philippines – The wife of Camarines Norte Governor ‎Edgardo Tallado has surfaced after she was reported missing and said that she feared for her life following her discovery of a “sex video” of her husband and his alleged mistress.

Josie Tallado revealed on television that she had attempted to escape from her husband who, her lawyer Lorna Kapunan said in a separate radio interview, had placed her client under “house arrest”.

In the television interview Wednesday, Mrs. Tallado, 43, disclosed ‎that her husband got mad at her when she saw the “sex video” of him and his 28-year-old mistress and accused her of uploading the footage on the Internet.

After the ‎discovery, Kapunan said Tallado confiscated all of Josie’s gadgets and cut off all her communication lines that was why she ran away “for fear of her life”.

In the interview with Radyo Inquirer 990 AM, Kapunan said Mrs. Tallado ‎met with her on Tuesday and sought a temporary protection order from their barangay (village) effective for 15 days before ‎surfacing to the media.

They then rode a motorcycle to Naga City, also in Camarines Sur, and traveled for two hours.

“They checked in to a motel. They thought their whereabouts would be traced if they took an airplane,” Kapunan said in Filipino.

In Naga City, ‎Josie was able to buy a second-hand car, which she used to drive to Metro Manila.