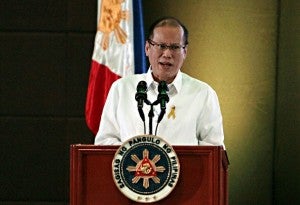 MANILA, Philippines–In so many words, yes, President Aquino said he was willing to go to jail for decisions he had made, such as approving the Disbursement Acceleration Program (DAP), which the Supreme Court subsequently declared unconstitutional.

The President, however, said he could probably go to jail only under an “unjust judicial system.”

Aquino made the remarks during a forum of the Foreign Correspondents Association of the Philippines when he was asked about the possibility that the opposition would win the presidency at the end of his term in 2016 and hold him accountable for his actions during his administration.

“I guess the best way to answer that is all the decisions I made were never spur of the moment. They were well studied and arising from the best advice I could get from various sectors. Now, at the end of the day, I think I can defend all of the decisions that we made,” he said.

“That doesn’t mean that all of the decisions were perfect. No, that will be incorrect to say that. It will it be an impossibility for an imperfect being to come up with perfect decisions all the time. So, all I’m saying is we can defend each and every decision that we have done, and if there is an underlying question to that—that I was vindictive in the previous administration—no.”

Referring to the alleged misdeeds of his predecessor, Gloria Macapagal-Arroyo, who is facing various corruption charges in court, Aquino said: “There is a difference between wrong and right…. If we do not fight that which is wrong, then we allow it to exist and we might even be nurturing it to continue its harmful effects on our people. That is the thing that we are trying to do.”

The President said that there was “corresponding evidence… for the appreciation of the courts” against those his administration had charged with criminal offenses for alleged corrupt practices.

Pushed for a more categorical answer if he was willing to be arrested and jailed if charges against him were filed after his term, Aquino replied:

“If there is a situation where we’re back to an unjust judicial system, then that is a necessary consequence.”

Aquino defended the DAP, an economic stimulus program, which the Supreme Court said was unconstitutional and whose authors could be held liable. He has repeatedly said he wants a constitutional amendment to correct this supposed judicial overreach.

Militant groups tried but failed to have President Aquino impeached over the DAP and the Enhanced Defense Cooperation Agreement (Edca) between the Philippines and the United States.

Critics of Aquino have vowed to make him accountable for the DAP and Edca after he steps down from office. A sitting president is immune from suits.

Aquino willing to go to jail if necessary