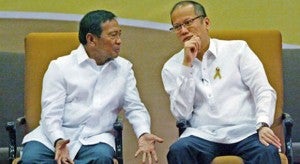 MANILA, Philippines–All appears to be well between President Aquino and Vice President Jejomar Binay a few hours after the latter slammed for the first time on Tuesday certain decisions of the President, as Binay faced an investigation and possible impeachment charges initiated by administration officials and allies.

Aquino and Binay talked for almost three hours on the night of Oct. 14 at the President’s official residence in a meeting arranged by mutual friends, according to a source privy to the meeting.

On Wednesday night, Binay confirmed reports that he and Aquino met and talked on Tuesday night but tried to downplay the meeting.

“Secret,” Binay initially told reporters, when asked about the meeting. He then confirmed that they did talk.

Binay spoke to reporters before he gave a keynote speech at the 2014 NCR Developers’ Forum at the Crowne Plaza Manila Galleria in Mandaluyong City.

He declined to say what he and the President talked about.

But he volunteered that he told the President that he never thought Aquino was among those who are part of the alleged demolition job against him.

“Ganoon ang tiwala ko sa kaniya (That’s how much I trust him),” he said.

Asked whether he remained an ally of the President, Binay said he was not only an ally “but because of that meeting, our friendship only became stronger.”

“No, it was a friendly talk. You should know the President. Yun si Presidente especially kung kaibigan, walang pulitika, walang problema. Kaibigan, kaibigan, How are you ba yun?” he said, when asked whether his meeting with Aquino cleared up things between them.

Asked whether he discussed with the President his complaint on why the Department of Justice was investigating him on corruption allegations, Binay said it was not a subject of their talk.

“Wala, hindi namin pinagusapan (We did not talk about it),” he said.

He described the meeting as “cordial and jovial,” noting that there was much laughter as they talked about old age.

Asked whether he initiated the meeting, he shot back whether that was important as long as that the meeting happened.

Binay seemed to backtrack on his statements questioning the mistreatment of former President Gloria-Macapagal Arroyo.

“Salitang abogado ’yun (That’s lawyer talk),” the Vice President said, adding he did not talk about the merits of the case but only questioned the bail that Arroyo was seeking.

“There never was a mention of the merits of the case but it was only on the question of the pending motion that I believed should be acted upon,” he said.

The Inquirer source said the two officials met from 9 p.m. to 12:30 a.m. which ended with both men “in high spirits” and laughing as Binay left Bahay Pangarap.

“The meeting cleared up a lot of things,” the source told the Inquirer.

The “gist” of the meeting had to do with Binay’s outburst on Tuesday at the PAO forum, according to the source.

“They had a heart-to-heart talk of what’s going on. There was no resolution to it. But there’s an understanding of where they’re coming from,” the source said.

The source said Binay spoke of the context of what he said at the forum, which he made in reply to a question by a lawyer.

“He had no intention of hitting the President,” the source said of Binay.

The Vice President “remains an ally of the President … and more importantly, he continues to be a real friend of the Aquino family,” said Cavite Gov. Jonvic Remulla, Binay’s spokesman.

Remulla issued the statement in the wake of what he said was “media speculation of a break between Vice President Binay and President Aquino.”

But an ally of the President said Binay should quit the Cabinet so he could get more elbow room to take a swing at the administration.

“Definitely, he (Binay) must get out of the Cabinet first so he can say whatever he wants to his heart’s content,” Caloocan Rep. Edgar Erice said, echoing his privilege speech four months ago egging the Vice President to show his “true colors” and make up his mind whether he was for the administration or the opposition.

“But knowing his (Binay) lack of delicadeza, I am sure he will not. He will surely regret losing out on the freebies given to a member of the Cabinet,” said Erice, a member of the ruling Liberal Party (LP).

With administration lawmakers zeroing in on his alleged corruption and ill-gotten wealth, Binay on Tuesday hit back, criticizing Aquino’s pet project, the Disbursement Acceleration Program (DAP), which the Supreme Court has declared unconstitutional.

At a forum of the Public Attorney’s Office (PAO) in Manila Hotel, the Vice President also vented his anger on moves by the Department of Justice to investigate him on allegations raised at the ongoing Senate blue ribbon subcommittee hearing inquiring into the allegedly overpriced Makati City Hall Building II. He slammed efforts of administration allies to impeach him.

The Vice President said the administration also mistreated former President Arroyo, who has been detained in a hospital while facing a plunder charge.

“Is the way they are treating Arroyo fair?” Binay asked during the forum. “She is no ordinary person because she became President. And she is sick. Is that fair?”

Malacañang distanced itself from Arroyo’s case, saying “the courts exercise jurisdiction over her and the cases and all attending incidents.”

The Vice President may have taken a swing at President Aquino, but Malacañang is not firing back yet.

Presidential spokesman Edwin Lacierda said both and his Cabinet “do not have the luxury of engaging” in issues related to the 2016 elections.

“We are focused on the problems at hand,” Lacierda said in a text message, citing government efforts to keep the country free from the Ebola virus, the expected eruption of Mayon volcano and the frequent breakdown of the Metro Rail Transit Line 3, among the issues preoccupying Malacañang.

Binay is a close family friend of the President and his family. He owed to the late President Corazon Aquino his appointment in 1986 as officer in charge of Makati, a position he parlayed into becoming mayor. The Binays have been in control of Makati since then.

Under the present administration, the Vice President was given a Cabinet post as housing czar and his office’s budget was increased to level of the P200-million pork barrel that senators used to get every year.

Communications Secretary Herminio Coloma Jr., who is identified with the Binay faction in Malacañang, sought to downplay the Vice President’s attacks against the administration.

Coloma said Binay’s statements were “expressions of his opinion on various issues and similar statements made by him in the past have not affected the cordial relations between him and the President.”

“The President has expressed satisfaction with the Vice President’s performance as a Cabinet member and that the latter should be given credit for his role in helping the administration achieve its targets,” Coloma told the Inquirer.

In his statement, Remulla said the views articulated by Binay at the forum with lawyers “were a product of the experience and wisdom he gained as a life-long human rights advocate and as a lawyer well-versed in the constructs of our legal system.”

Contacted on the phone, Remulla insisted Binay was not angry with the President.

Remulla also said the Vice President was frustrated with “a lot of things going on in the country.”

And lest someone misconstrue it, Remulla said Binay was supposed to attend a meeting by a Cabinet cluster on housing in Malacañang with President Aquino but couldn’t make it as he had to attend the anniversary of the National Housing Authority.

Erice wondered why the President would harbor the Vice President even if Binay continued to be one of this administration’s biggest critics.

“I am not sure (why Aquino wanted Binay in the Cabinet). Maybe he just doesn’t want ‘na nagpapaawa na tinanggal sa Gabinete’ (seeking public sympathy while being removed from the Cabinet),” Erice said.

Iloilo Rep. Jerry Treñas, an LP member, said that it was not for Aquino to decide if Binay should leave the Cabinet.

“That decision is for the Vice President to make and not for me to say. If he thinks he can still be effective in spite of the criticisms he has made against the President and his administration, then he should make his decision accordingly,” said Treñas. “The President will not ask him to resign. It is up to him.”

Erice said the criticisms made by Binay against the President “were not new” as he had been declaring these in private conversations. “What is new is that the Vice President is now in panic mode.”

1M doses of Sputnik V Light to arrive in September