De Lima made the statement as she disclosed that the Department of Justice has been considering looking into the allegations made in the Senate Blue Ribbon subcommittee hearing on the alleged overpricing of the P2.28 billion Makati City Hall Building II.

The hearing has also heard testimonies from former Makati officials that bidding processes in the city had been rigged to favor certain suppliers, and that Vice President Jejomar Binay received kickbacks from infrastructure contracts when he was Makati City mayor.

The latest claim, coming from Mercado, was that Binay had a 350-hectare estate in Batangas that featured a copy of London’s Kew Garden and an air-conditioned piggery, the construction of which was funded by money from the overpricing of the Makati City buildings. 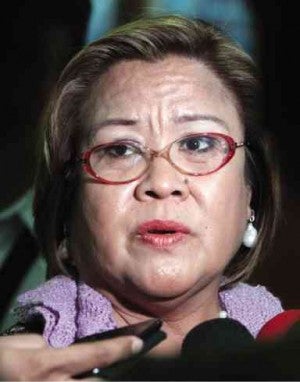 The Binay camp has denied the allegations and has branded Mercado’s statements as lies.

De Lima said she was keeping tabs of the Senate hearings on the Makati City issues, and would decide whether the National Bureau of Investigation, the DOJ’s investigating arm, would conduct its own probe.

She noted that the Office of the Ombudsman has been handling the matter.

“But the more information, evidence and details in the testimonies come out, the more that we become interested in joining the fray,” she told reporters in an ambush interview in the Senate, where she defended the DOJ’s 2015 budget.

She said the NBI’s findings could later be consolidated with that of the Ombudsman’s, similar to what was done in the pork barrel cases. Vice President Binay and Makati Mayor Jejomar Erwin Binay are facing a plunder complaint over the parking building.

She said Mercado was able to give details that presumably he knew because he was a participant in the purported shenanigans.

This was the same case with Benhur Luy and the other whistleblowers in the alleged misuse of pork barrel funds, who admitted to having participated in the corrupt acts, she said.

“That is why whistleblowers more often than not are considered credible, because they know what they’re talking about because they’re right there, they were involved,” she said.

“So I think on the whole, we can consider these testimonies or these witnesses as credible,” she added.

Aside from Mercado, the Senate witnesses who had admitted involvement in irregularities were former General Services Director Mario Hechanova, who said he rigged the bidding for Makati projects, and Hechanova’s predecessor Ernesto Aspillaga, who said he participated in farcical bidding.

A businessman, Jose Orillaza, also testified that he had been the Vice President’s dummy in Omni Security Investigation and General Services, which had bagged contracts in Makati City. Orillaza used to be the President of the firm.

As to whether the Vice President should explain the allegations made against him, De Lima said on Thursday that this was a matter that should be left up to him.

But she also said that if more people would believe the hearings and find witnesses credible, the more pressure would be on Binay to present his side.

Meanwhile, De Lima also said Mercado, now in the Witness Protection Program, should be more circumspect about disclosing details of his stay in the program and should not make unnecessary trips.

She said Mercado would be warned first about the WPP rules and would be advised to observe them. Severe violations of the rules might result in witnesses being discharged from the program, she said.

But she also said that trips intended to support his testimony in the Senate would be permitted and he must have security with him.

But the DOJ could not shoulder the cost for helicopter rides, she said. She said Mercado’s helicopter ride to take pictures of the Vice President’s purported Batangas estate did not pass through her. She would ask the WPP director about it, she said.