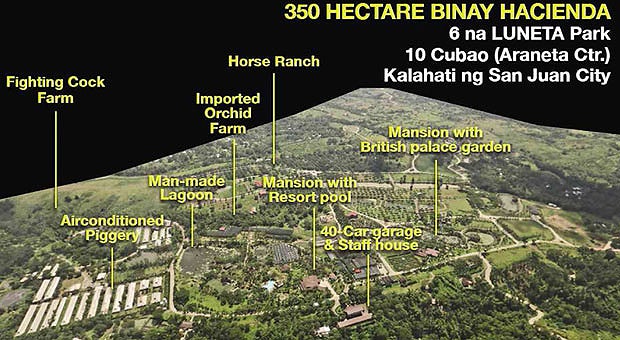 MANILA, Philippines–A construction firm was forced to pad the costs of buildings it built for the Makati City local government when it could not collect from Dr. Elenita Binay P30 million for its work on a P1.2-billion sprawling farm allegedly owned by the Binays in Batangas province, a former city official said on Wednesday.

Elenita, a former mayor of Makati, is the wife of Vice President Jejomar Binay.

Developed over the years, the hacienda is now home to two mansions, one with a garden copied from a British royal garden, a pavilion, a 40-car garage, two man-made lagoons, an orchard and a cock farm, among others, Mercado said.

The property dwarfs Philippine National Police Director General Alan Purisima’s controversial 4.5-hectare property in Nueva Ecija province and would be more worthwhile for journalists to “feast” on it, he said.

Beneath the veneer of luxury, the estate was a source of dispute between Elenita and Hilmarc’s Construction Corp., Mercado said at the resumption of the Senate hearing on the allegedly overpriced P2.28-billion Makati City Hall Building II.

He said he “pitied” Hilmarc’s chair Efren Canlas and the late city engineer Nelson Morales when they could not collect some P30 million to P50 million from Elenita for Hilmarc’s work on the farm.

In the Senate inquiry, Hilmarc’s has emerged as the city government’s favored contractor.

“Once they confided to me, ‘Sir, we have a problem. Dr. Binay owes us P30 million, and hasn’t paid up. Yet, she wants the work on the farm quoting Hilmarc to continue,’” Mercado said.

The former vice mayor gave Canlas and Morales a simple piece of advice: Reduce the kickbacks they were delivering to the Binays out of the contracts that Hilmarc’s had cornered. They did as told.

But when Elenita found out about this, she was fuming, Mercado said.

“The next day, my ninang (godmother) was cursing me. ‘How come some amount was missing in the bag and only the list was there? You can’t do that.’ When I told her the amount paid Hilmarc’s work in the hacienda, she said to find other ways to pay engineer Canlas,” Mercado quoted Elenita as saying. 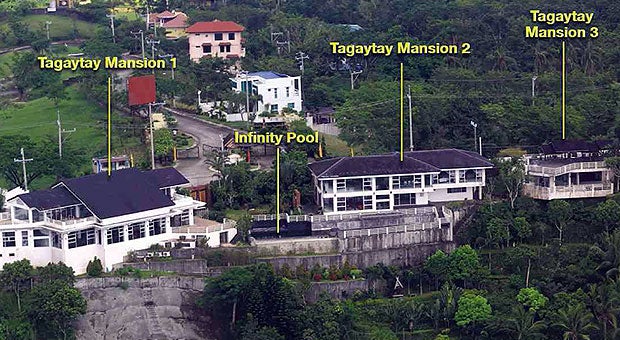 ‘TAGAYTAY’ MANSION OF BINAY From 1,000 square meters (where mansion 2 is located [middle]) that was the attorney’s fee that Jejomar Binay got for winning the Ladislao Diwa case, the property expanded to mansions 1 and 3 in Laurel, Batangas, according to former Makati City Vice Mayor Mercado.

“The reason every [Makati City government] building was overpriced was that engineer Morales and engineer Canlas were obliged to embrace and add on the continuing work on the farm [to the cost of buildings] even though engineer Canlas was against it,” Mercado said.

“So everything that engineer Canlas built in Makati was overpriced,” he added.

All this was on top of the P1 billion that Canlas had contributed to the Binays in the 2010 elections, according to Mercado.

On Wednesday, Mercado said “Hacienda Binay” was so large that it straddled four barangays (villages) in Rosario town. It’s half the size of the 700-hectare San Juan City in Metro Manila, six times the size of Luneta Park and 10 times that of Araneta, Cubao.

The aerial footage that his group took and that he presented to the subcommittee showed a property that has a concrete road network, a mansion with a resort pool, an air-conditioned piggery, orchard, horse ranch, a mansion with a British-inspired royal garden, a 40-car garage and staff quarters, among others.

“That came out in the Inquirer. That was copied by Dr. Binay in 2007. That is the Kew Garden in London. She forced me to visit it; I didn’t know she wanted to copy it,” he said as he annotated his presentation.

British queens and princesses had the garden built, along with a rest house. Elenita topped it by building a larger garden and rest house, Mercado said.

The mansion, with a resort, has an adjoining pavilion. It has a separate guesthouse, he continued.

Elenita also had two sections of the farm dug up to create a man-made lagoon (“because she has big dreams and strongly feels she’d become first lady”) and had an aviary built.

Recalling the media frenzy over Purisima’s property, Mercado said this paled in comparison to the 40-car garage and the staff house of the Binays in the hacienda.

And how come the piggery is equipped with air-conditioning units?

“Dr. Elenita abhorred foul odor and the sight of flies in their mansion,” Mercado said.

And while he’s been called a gambler, the former vice mayor said that Makati Mayor Jejomar Erwin Binay Jr. has a cockfighting farm, complete with breeding and training areas, on the estate.

The estate also has a ranch for imported horses.

“If you go to Hawaii, there are beautiful orchids. If you go to Vietnam, you’d find some, too. The same with Thailand. Here, if you’re given a chance by Dr. Binay, you’d find all kinds of orchids there,” Mercado said, referring to her orchid farm.

“If the wives of mayors in Manila and nearby provinces would find the courage to talk, they could talk of their visits there,” he added. “Now, I doubt it if she would allow visitors.”

In 2001 and 2002, the Binays acquired 95 hectares, Mercado said, showing slides of the titles of the land. Twelve years later, this more than tripled to 350 ha.

“That’s the full view. I can’t imagine we’re in the Philippines unless we tell you,” he said. “I’m amused by their claim that they’re only leasing 9 hectares and that the Vice President has divested [himself] of his interests in Agrifortuna (registered owner of the estate). That could be true. The truth will come out eventually.”

In 1992, Jejomar Binay originally bought 5 ha from one Delfin Almeda and experimented with raising 50 pigs, said Mercado, who admitted to serving as the farm’s errand boy, buying feeds and delivering the wages of workers.

“That was the Binay law office before,” he said.

“Does she have a right to be an incorporator?” he asked of Sedillo, who lives in a housing project in Makati. “I’m not belittling her. I’m presenting all this because it’s about time we knew the truth.”

Mercado said it was easy for the media to find the farm, before showing a video footage that indicated that residents in Rosario knew the farm was owned by the Binays, and where to find it.

“The Vice President said he’s ready to undergo a lifestyle check. And since General Purisima has been courageous to face the press, and show his property, I urge the media to feast on this property,” he said.

“I’m 101 percent sure this was owned by the Binays,” he said. He claimed he had visited the farm 100 times.

Read Next
Binay asks Pacquiao to run for senator in UNA slate
EDITORS' PICK
Duterte: Authorities may take over hotels, but it’s not a ‘remedy’ in a democracy
Smart is fastest 5G Network in PH – Ookla
When will PH get enough COVID-19 vaccines? ‘I really don’t know,’ Duterte says
Duterte defends govt’s efforts vs COVID in 2020
Smart introduces Smart Barkada with the launch of Double GIGA
LT Group, Inc. Notice of Annual Shareholders’ Meeting 2/2
MOST READ
‘Duterte a total failure as leader. He must step down’ – group
Duterte ‘privately’ dealing with China invasion in West PH Sea – Palace
Ramon Tulfo says gov’t running PH like a ‘headless chicken’
Stop acting like a colonizer, PH business groups tell China
Don't miss out on the latest news and information.