Binay on exposé of ownership: It’s a dud | Inquirer News

Binay on exposé of ownership: It’s a dud 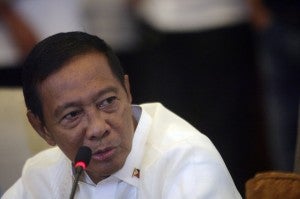 MANILA, Philippines–The camp of Vice President Jejomar Binay on Wednesday dismissed as a “dud” the new allegations by former Makati Vice Mayor Ernesto Mercado that he owns a 350-hectare farm in Batangas province.

Businessman Antonio Tiu also denied that he was Binay’s front on the farm and said he would face the Senate blue ribbon subcommittee to clarify things about the property.

Binay’s camp maintained that the Vice President did not own the farm in Rosario town, as alleged by Mercado at Wednesday’s hearing called by the subcommittee, but only leased 9 hectares of it for his own piggery farm plus the flower farm of his wife, former Makati City Mayor Elenita Binay.

And of the 9-hectare property, Binay’s occupied some 3 hectares of it. The flower farm of Binay’s wife, meanwhile, covers 1 or 2 hectares, Binay’s lawyer Martin Subido told the Inquirer.

Subido also stressed that since the Vice President sold his interests in the piggery farm to Agrifortuna Inc. in 2010, what remains under lease now is the flower farm of Mrs. Binay. And the lessor of the property now is Sunchamp Real Estate Development Corp., operator of Sunchamp Agri-Tourism Park.

Binay, who was interviewed in General Santos City, declined to answer questions about the Inquirer report quoting Mercado as saying he owned the Batangas property.

“Let’s just see,” Binay said in the interview, a transcript of which was released by his office to Manila reporters.

In a statement, Binay’s political spokesman, Cavite Gov. Jonvic Remulla, slammed Mercado for his “amateurish attempt” to copy the exposé done on the property of Philippine National Police chief Director General Alan Purisima when the former vice mayor took video footages and photos of the property from a helicopter.

“The detractors showed an aerial video and photos of the property, an amateurish attempt to do a repeat of the Purisima exposé. Any doubt that the Senate probe was after legislation on the Makati City Hall Building II has been erased by today’s hearing,” Remulla said.

Explaining the property, Subido said the farm was not 350 hectares but 145 hectares and that 9 hectares of it were leased by Binay starting 1994.

He gave a breakdown of how the property was used.

Three hectares covers Binay’s JCB Farms and another 2,000 square meters was used for improvements that included an office building.

Subido said in a phone interview Binay’s camp had “three decades” of documents duly filed and reported in the Vice President’s statements of assets, liabilities and net worth and his income tax returns.

He said Binay sold his piggery farm in 2010 to Agrifortuna Inc., a company owned by Laureano Gregorio. Agrifortuna is engaged in hog breeding and nursery and is located also within the 145-hectare property and near JCB Farms.

He said the Binay couple had been incorporators of Agrifortuna for a paid-up capital of P50,000, but sold their shares to Gregorio in 1995.

“The house, swimming pool and garden mentioned in reports are not owned by the Vice President. They are owned by Laureano Gregorio,” he said.

Sunchamp’s acquisition of all the rights of Gregorio to the property had been duly disclosed to the Philippine Stock Exchange and the investing public in October 2013 and July 2014, Subido said.

“At present Sunchamp Real Estate Development Corp., is the absolute owner of the improvements and facilities mentioned in [Wednesday’s hearing]. In fact, Sunchamp has likewise introduced new improvements such as an asparagus farm, greenhouses for high-value crops, hotel, all in line with its vision to create an agri-tourism park,” Subido said.

Tiu said that allegations that he was a dummy of Binay were “baseless,” adding that he would soon face the Senate to clarify issues.

Tiu was in ANI’s office in Spain, but he said in a text message that he was ready to face the Senate as soon as he got back to Manila.

“Unbelievable that I have to be dragged into the political circus,” Tiu said. “Everything I own through Greenergy and Sunchamp is aboveboard and disclosed to the public. I will cut short my business trip to face these baseless allegations.”

Asked why he thought he was implicated with the Binays and whether he was friends with the Vice President, Tiu said it’s likely because he had been using the Subido Pagente Certeza Mendoza & Binay law firm since he started his companies.

Tiu’s 145-hectare Sunchamp estate leases land from several people, including Agrifortuna Inc., formerly a joint venture between the Binays and the Gregorios, but the Gregorios bought Binay’s stake and infused more capital.

Sunchamp leases land from several parties, including Agrifortuna but the contract with Agrifortuna is for less than 10 hectares, Tiu said.

On the issue of hospital beds, Tiu said Mabuhay 2000 Enterprises—the old name of ANI before diversifying into agri-business—had indeed imported hospital beds but did not supply them to Makati. Instead, he said, Mabuhay 2000 supplied the beds to Apollo Medical, which was led by Apollo Carreon and sold the beds to Ospital ng Makati.

Asked whether ANI and Greenergy would implement any share buyback program now that shares were battered by these allegations, Tiu said: “I will focus more on the business first rather than share buyback.”

Mabuhay 2000 Enterprises was incorporated in 1997 as an importer, trader and fabricator of postharvest equipment intended to improve the productivity and income of Filipino farmers.

The company was eventually renamed ANI after the diversification into agro-commercial businesses, focusing on the export trading of fresh Philippine carabao mango, cavendish banana and pineapple under the FCA brand, as well as coconut water under the “La Natural” brand.

ANI operates in the greater China region, Australia and Europe through its subsidiaries or joint-venture partners.

Locally, ANI operates through its direct and indirect subsidiaries under the farm-to-plate model, including First Class Agriculture Corp., which distributes fresh produce to various channels under the FCA brand.

It also owns canning and tetra facilities in the export processing zone and fruit processing and banana farms in Mindanao, as well as engages in rice milling integrated with micro financing of farmers in partnership with China’s biggest agricultural firm, Beidahuang.

Greenergy is in the field of renewable energy but is also considering ventures in agriculture, agri-tourism, real estate development, banking and finance, and information technology.

Tiu is a Ten Outstanding Young Men (TOYM) awardee in 2011.