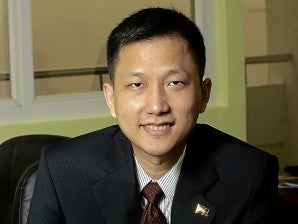 Businessman Antonio Tiu of AgriNurture  Inc., the first and only purely agricultural company listed on the Philippine Stock Exchange (PSE), must really know what he was talking about when he said that there’s money in agriculture.

While Filipino farmers remain the least paid workers in the country with an average daily wage of only P156.80, according to a report by the National Statistical Coordination Board (NSCB), Tiu is already a millionaire at age 36.

Tiu had no inheritance from his parents. His success story started after getting a commerce degree in De La Salle University and joining a company to work with the people he loves—farmers.

“I think, because of my passion to be in agriculture, I took the job that had less monetary rewards but was personally more satisfying,” he said.

From his work with farmers, he found opportunities in agriculture that are unexplored.

“I saw so many opportunities, but, at the same time, there were so many people who were jobless, hungry, deprived of basic needs,” he said.

Today, Tiu’s AgriNurture, which he started a few years ago, is now recognized as the country’s biggest mango exporter and fruit and vegetable supplier in partnership with what he likes to call “our communities.”

He said among the many areas that have good potential for full agriculture development is Davao.

In a bid to further improve the lives of farmers, like those in rice, vegetable and fruit-tree producing communities in Southern Mindanao, Tiu said agri-tourism can help boost farmer incomes.

“They can organize themselves and develop their areas into agricultural tourist spots,” said Tiu.

“For example in Davao, there are a lot of potential agri-tourism areas such as banana plantations,” he said.

With sales in excess of P1 billion, Tiu said AgriNurture’s success lies in its integration of its four major divisions—farming, production, distribution, retail and franchise.

The move, Tiu said, “not only lowered the farm gate prices of our products, it has also raised the income of farmers by eliminating middlemen in the supply chain.”

“We would like to integrate the entire agricultural sector so there will be no more poor farmers in the country,” he said.

“If every farmer is rich, then the nation is rich,” he added.

He said communities needed to be empowered by firms, like his, establishing partnerships directly with the people.

He said currently, AgriNurture was developing 10,000 hectares of ancestral domain for the benefit of indigenous peoples.

He said the establishment of an agricultural bank is also worth considering. This, he said, would protect farmers from the misuse of loans. The bank will lend seedlings, fertilizers or pesticides instead of cash, he added.

The potential of agri-tourism, he said, is huge. “We have so many scenery that can be enhanced through farming,” he said. “If we develop agri-tourism, farmers would have income on a daily basis.”