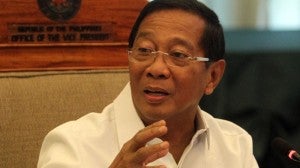 MANILA, Philippines— Vice President Jejomar Binay believes that the trials he and his family are facing, with all the corruption allegations being thrown at them, will pass even as he admits to being deeply hurt by them.

Binay said he has not allowed recent events to affect his work as the country’s second highest official.

In an interview with Inquirer Radio on Wednesday, Binay said that he and his camp have already answered the allegations raised against him in the Senate inquiry into the allegedly overpriced Makati parking building, in the course of which charges emerged that he had benefited from kickbacks from infrastructure projects and that he had formed dummy corporations to hide his wealth when he was still the mayor of Makati City.

Binay declined to elaborate on the allegations of former Makati Vice Mayor Ernesto Mercado and a businessman that he had received kickbacks amounting to 13 percent of the cost of the city’s infrastructure projects and he had used dummy corporations to do business with city hall.

“I leave it all to God. It will not do for us to throw mud and whatever else at each other,” Binay said when asked to comment on Mercado’s allegations.

He said he and his family were not scared of the allegations because they were telling the truth.

Binay reiterated that the smear campaign against him had everything to do with his bid for the presidency in 2016.

At the end of the day, Binay believes the allegations against him will not stand because they are not true.

Asked about his relationship with President Aquino, Binay said they have been friends for years and their different political ties would not affect their long friendship and history.

“As I always say, I owe a debt of gratitude to the Aquino family,” he said.

They said that for the subcommittee to dismiss the challenge they filed was “arbitrary, capricious and whimsical.”

The younger Binay attempted to stop the subcommittee hearing into the overpriced Makati building last Thursday by filing the jurisdictional challenge questioning the subcommittee’s authority to issue a subpoena ordering him to appear at that day’s hearing.

He claimed that the subcommittee had no jurisdiction “to determine whether or not he violated Republic Act No. 3019 (the Anti-Graft and Corrupt Practices Act) or Republic Act No. 7080 (the Plunder Act) as the matter was “within the province of the courts rather than of the legislature.”

However, the subcommittee headed by Sen. Aquilino “Koko” Pimentel III later that day rejected Binay’s challenge and declared that it had jurisdiction to investigate the allegedly overpriced Makati building.

Binay’s lawyers led by Claro Certeza again demanded that the Senate inquiry into the Makati building be suspended “pending a ruling from the whole committee.”

According to Certeza, in case of a jurisdictional challenge, the matter should first be resolved before the inquiry proceeds.

“It is imperative that the jurisdictional challenge of the movant be presented to all the members of the honorable committee for proper evaluation and ruling,” Certeza said.

The lawyer also denounced the procedure by which the subcomittee ruled on their jurisdictional challenge saying that the Senate rules have provided that the challenge “should have been decided by the whole blue ribbon committee and not by a mere subcommittee.”

Certeza earlier said they planned to take the case to the Supreme Court.

(With Maricar B. Brizuela)