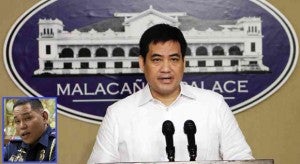 MANILA, Philippines–Malacañang on Wednesday came to Director General Alan Purisima’s defense, describing his Senate testimony as “truthful” and saying he still had the “moral ascendancy” over the Philippine National Police despite allegations of corruption.

But Sen. Francis Escudero said there may be more reason to hold Purisima accountable for the big discount he got for the purchase of a sport utility vehicle last year than for the donation from his friends for the renovation of his official residence in Camp Crame.

Consumer and anticrime groups have filed plunder and indirect bribery complaints against Purisima in the Office of the Ombudsman over the renovation of his official residence, dubbed “White House,” and his Nueva Ecija property.

Presidential spokesman Edwin Lacierda said it was up to Purisima to take a leave of absence amid the charges filed against the PNP chief.

Asked if Purisima still had the moral ascendancy over his men, Lacierda replied: “Yes, I believe so.”

Even before Purisima appeared in the hearing called by the Senate committee on public order headed by Sen. Grace Poe, there have been calls from various parties for him to take a leave of absence or to resign if he could not explain the allegations against him.

But Escudero said resignation, early retirement and a leave of absence were all voluntary actions, and Purisima could not be forced to do these.

Unless the President decides to replace Purisima, he could not be forced to leave, he added.

He also said the complaints against Purisima should just continue to go through the process.

Escudero also said it would be up to Purisima and to President Aquino to decide if Purisima’s continued stay at the top PNP post was detrimental to the organization.

The PNP chief has attributed the allegations against him to syndicates affected by his efforts to clean up the corruption in the PNP Firearms and Explosives Division, and to put order to the system for the issuance of gun licenses.

Purisima also said he would not leave his post and would continue doing his duty.

But senators are dissatisfied with Purisima’s explanations about the process he followed for accepting the P11-million donation for the renovation of his official residence.

Poe noted at the hearing that the deed of donation was signed only on Sept. 3, 2014, when the work on the house was completed last year.

Purisima also said his friends had thought of donating the house because the PNP chief’s official residence was prone to being submerged in floods.

The donors have no contracts with the PNP, according to Purisima. He said he was just the incidental beneficiary of the donation and would be leaving the house to his successor.

Lacierda did not say whether Purisima’s answers during the Senate inquiry on Tuesday should put to rest the controversies hounding him.

“My point is he appeared before the Senate. He answered those questions truthfully and whether one [believes him or not], it depends on how one assesses his testimony and we’ll leave it to those who listened to the Senate investigation,” he said.

At the hearing, Purisima claimed he had acquired at a “discounted” price of P1.5 million a sport utility vehicle, which Poe said could be worth P4 million.

He also admitted to receiving an P11-million donation for the renovation of his official residence last year.

Purisima also came under fire over his 4.7-hectare property in Nueva Ecija, which was purportedly acquired using his salary and family savings.

Teresita Ang-See, head of the crime watchdog Movement for the Restoration of Peace and Democracy, said accepting such lucrative offers meant that Purisima’s position was untenable.

“The danger there is conflict of interest. People can capitalize on that and ask for favors, maybe not now but in the future,” she said.

A minority bloc lawmaker said Purisima should not be blamed for having big-hearted friends.

“We can’t do anything if he has plenty of friends. It’s not illegal to have many generous friends,” Isabela Rep. Rodolfo Albano said in a text message.

He said Purisima based his testimony on the statement of assets, liabilities and net worth (SALN) where he listed his Nueva Ecija property at a low price.

Albano said the asset was probably based on its fair market value, which was also used as a basis in the payment of property taxes.

“The guy is trusted by President Aquino. Let’s give him a break. We also have to give him the benefit of doubt. He took an oath to tell the truth and nothing but the truth so help him God,” Albano said in a text message.

Eastern Samar Rep. Ben Evardone said that Purisima’s presence at the hearing showed his readiness to face the charges against him head-on.

“There are already cases filed against him and I think the court will be a good forum for him to fully explain all questions raised against him,” Evardone said.

But a member of the Liberal Party, Iloilo Rep. Niel Tupas Jr., said that Purisima raised more questions and doubts.

“He has not explained his SALN satisfactorily, he has not been straightforward in his answers. The controversy has affected the reputation of and has eroded further the people’s trust in the PNP,” Tupas said in a text message.

In the Senate, Escudero said Purisima had so far not explained the discount he enjoyed for his Toyota Land Cruiser Prado, which he bought from a San Fernando, Pampanga, car dealer for P1.5 million.

In the case of the donation for the PNP chief’s official residence, this passed through the Commission on Audit (COA) and would officially belong to the PNP, Escudero noted.

“If ever, that (Toyota Prado discount) is more likely to fall under graft instead of the donation. The donation passed through the COA and the government received it. It was for the government, and the only angle being looked at is if there would be a favor in exchange for this,” Escudero told reporters.

“But in the car issue, the angle there is why was he given a discount? Why was the discount that big and what was the reason it was given to him if it was not given to everybody who buys a car?” he added.

Poe, chair of the Senate committee on public order, noted during Tuesday’s committee hearing that a Land Cruiser Prado would have cost about P4 million, and said Purisima should have wondered why he was getting a discount.

“I’m not saying it’s your fault that you were able to get it at a discounted price. But you should have taken a second look at that big a discount…. Ask yourself, why is this being given to me at a cheaper price?” Poe said, and asked whether the dealer had a contract with the PNP.

The Toyota Philippines website put the price range of different Prado models from P2.97 million to P3.85 million each.

Purisima said the dealer had no contract with the PNP.

Lacierda did not say whether the Palace was buying Purisima’s explanations.

“I have not spoken to the President about it, but again, this is an issue where you see General Purisima answering all the questions with candor,” he said, noting that the responses were based on Purisima’s SALN.

“We have to hand it to General Purisima that he answered all those questions truthfully.”

Asked if Purisima was still fit to lead the PNP, Lacierda cited the “number of reforms” the PNP chief had implemented, such as the “continuing improvement on the system of reporting all these incidents of crime.”

Lacierda also highlighted the “discipline that he brings to the PNP.”–With a report from AFP