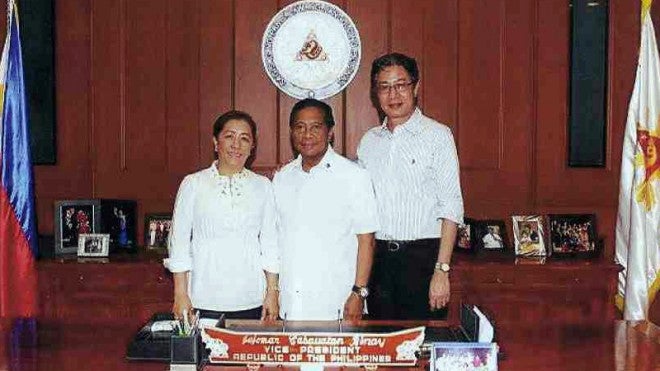 MANILA, Philippines–While still leading potential rivals in the presidential election in 2016, Vice President Jejomar Binay saw his rating take a hit among voters, declining 10 percentage points amid allegations that he got kickbacks from projects of Makati City when he was its mayor, results of a survey conducted early this month showed.

Binay topped the list of 15 potential presidential candidates with 31 percent, down from the 41-percent voter preference in July.

The Pulse Asia survey on presidential preference asked respondents: “Of the people on this list, whom would you vote for President of the Philippines if the 2016 elections were held today and they were the candidates?”

The respondents were instructed that they could mention others not on the list.

Using face-to-face interviews, the nationwide survey from Sept. 8 to 15 covered 1,200 Filipinos aged 18 and older. It had a margin of error of plus or minus 3 percentage points.

The Binay camp was unfazed by the drop in his numbers.

Navotas City Rep. Toby Tiangco, interim president of Binay’s newly formed United Nationalist Alliance party, said his group was expecting a bigger decline in the Vice President’s numbers given the black propaganda waged against him and his family by his political foes.

“We’re still up,” Tiangco said in a phone interview.

In a statement issued by the Office of the Vice President, Tiangco said the survey results came as a “surprise” because people still believed he was the person who could serve the country’s top post despite the severe attacks against him.

“The public is aware that the allegations against the Vice President are part of the modus of the administration allies to discredit him and his family,” Tiangco also said in a statement.

But Malacañang expects Binay’s once formidable rating to continue its downward spiral as long as he continues to dodge accusations that he and his family received kickbacks, rigged public bidding, and used dummies in hiding their true wealth.

“If the Vice President will be unable to confront these issues head on and convincingly, his ratings may continue to unravel,” said Presidential Adviser on Political Affairs Ronald Llamas.

Llamas said the drop in ratings for Binay was “definitely a result of the Senate investigation of alleged corruption of the Vice President and his family. Corruption will still be a dominant issue going into 2016.”

The Vice President is facing a plunder complaint and a Senate blue ribbon subcommittee inquiry in connection with the allegedly overpriced P2.3-billion Makati City Hall Building II, a parking building that was built when he was still Makati mayor.

The Senate probe, which began as an investigation of the parking building, has widened its net to cover other allegedly corruption-tainted projects in Makati City when Binay was its mayor and even his alleged hidden wealth.

“Because if that was the main reason for the drop, then why did the numbers of his main accuser (Senate Majority Leader Alan Peter Cayetano) not go up,” said the UNA interim president.

Tiangco also pointed out that Pulse Asia did not provide information about why Binay’s numbers went down.

Still, Tiangco said that UNA could not discount that the dip in Binay’s surveys results “could be attributed to the black propaganda” against him. 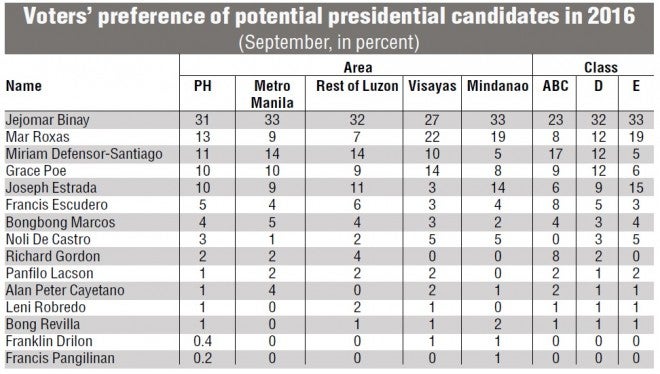 Tiangco said that UNA would work to improve Binay’s numbers “one step at a time” and that there was no reason to panic because the 2016 elections were still 19 months away.

In his statement, Tiangco said UNA expected the black propaganda against Binay to intensify even more but the Vice President was ready to answer it.

“The latest figures will only motivate the Vice President to improve the bar of public service, and no amount of smear and slander can shake him,” he said.

Llamas said the political landscape remained “very fluid” with a lot of things expected to happen in the months leading to the May 2016 elections.

Liberal Party members cheered the survey results as Roxas, the party’s presumed presidential candidate, boosted his stock by almost doubling his share to 13 percent from 7 percent.

“Mar’s gain in the survey without doing any campaign is remarkable. It also means that the 2016 presidential election will be between Binay and Roxas. The old trapo ways versus the ‘tuwid na daan,’ between black and white,” said Caloocan Rep. Edgar Erice.

“It only shows that Secretary Mar is a viable candidate for president. The election in 2016 is still far but I always see the endorsement by President (Aquino) as a strong support to whoever gets it,” Treñas said.

Erice said he was surprised by the results because he expected Binay’s stock to drop by only 5 percentage points and not 10.

“This showed the people really understood that there was a real basis to dig deeper into the anomalies involving the Vice President,” Erice said.

But UNA was also surprised that Binay managed to keep a substantial lead over his rivals despite the all-out assault against him and his family.

“Given the very challenging and rough times that the Vice President faced in the past weeks, we expected a bigger decline—but the latest survey results are a surprise for us. It showed that the majority of the public still looks to the Vice President as the answer to their problem,” Tiangco said.–Reports from Inquirer Research, Christine O. Avendaño and Gil C. Cabacungan