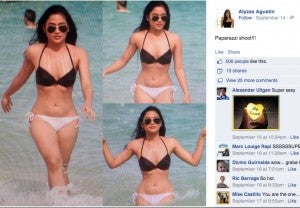 The PNP maintained this as ‎Ignacio washed his hands on the issue alleging him of giving a signed business card to Agustin with a message that seeks to provide assistance for the sexy freelance model.

‎”There is a problem on the authenticity of the card. So basically, that’s fake,” Senior Superintendent Wilben Mayor, PNP spokesperson, told reporters Wednesday.

Earlier, Ignacio denied knowing Agustin and giving him his calling card‎. This was supported by the model’s apology, saying she does not personally know the official.

Ignacio also clarified that his rank on his alleged business card was false. In the card Agustin posted, “Alexander C Ignacio, CESE Police Director, Director for Plans” was written in print.

“‎The card which she posted is not an official PNP business card representing my office, my rank, and my designation. I am a Chief Superintendent (1-star rank) and not a Director (2-stars),” Ignacio said in a statement.

When asked if Agustin may be filed with falsification of documents complaint, Mayor said it is up to Ignacio if he would file charges against her.

The PNP spokesperson also asked the public not to drag the name of the PNP organization and said that Ignacio was not at fault in the issue.  ‎

“Let me just reiterate, the PNP is not liable here. Please do not drag the name of the organization,” ‎he said.

(The police should be more careful in giving out their calling cards because the public perception now is that these cards are being abused.)