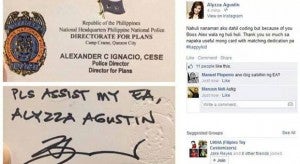 MANILA, Philippines–The police official who is in hot water over the viral post of Alyzza Agustin denied knowing the sexy model and disowned the business card she showed off online.

“First of all, I categorically DENY that I personally know Alyzza Agustin, who claimed that she used my business card to avoid getting a traffic citation,” Chief Superintendent Alexander Ignacio, Philippine National Police (PNP) Directorate for Plans head, said in a statement sent to INQUIRER.net.

He said that he is “currently in Malaysia giving a presentation for the Philippine National Police for an Aseanapol conference and that is why (he) could not respond (to the issue) sooner.

Agustin, who is a model for men’s magazine FHM, has been under fire for bragging on social media that she had evaded a traffic violation after presenting Ignacio’s alleged calling card.

The police official also clarified that his rank on his alleged business card was false. In the card Agustin posted, “Alexander C Ignacio, CESE Police Director, Director for Plans” was written in print.

“The card which she posted is not an official PNP business card representing my office, my rank, and my designation. I am a Chief Superintendent (1-star rank) and not a Director (2-stars).”

On the back of the card, a message allegedly from Ignacio read: “PLS ASSIST MY EA, ALYZZA AGUSTIN” with his supposed signature below.

“She is not my Executive Assistant and there is no such position in my office,” the police official clarified.

Ignacio also explained that while he gives out his business card, he does not condone its use for “illegal gain.”

“I do give my business card to those who request it. But it goes with the implied condition that it will NOT be used to violate laws, to shorten prescribed procedures, and for illegal gain,” ‎Ignacio said.

“I will not tolerate the use of my business card, the facilities of my office or the privileges of my rank for unlawful purposes, Thank you for your fair (and) accurate reporting of the facts and issues,” he added.