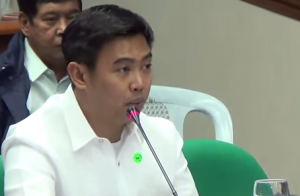 After Makati Mayor Jejomar Erwin “Junjun” Binay challenged the jurisdiction of the Senate to investigate him on corruption allegations, Majority Leader Alan Peter Cayetano countered with a warning: The chamber can arrest any person who will not comply with its subpoena.

(If they are ready to face the investigation, why are they turning their backs or refusing to appear so it looks like they’re untouchable in the country . . .”)

“Lahat ng pwedeng i-subpoena . . .at hindi sinunod yung subpoena, ang proseso po dun bibigyan sila ng pagkakataong ipaliwanag tapos pwede na silang ipa-arrest.”
(All who can be subpoenaed . . . and did not comply, the process there is they will be agiven a chance to explain and then they can be arrested.)

“Alam mo kapangyarihan ng Kongreso at ng parliamentary time immemorial pag binalewala ito ng mayor baka balewalain na ito ng lahat ng tao,” Cayetano said.
(It is common knowledge since time immemorial that this is the power of Congress and of Parliament and if this will be ignored by the mayor, then this may be ignored by everyone.)

But the arrest or even a subpoena, he said, would not be used against the vice president out of courtesy to his office.

(In the case of the vice president, I don’t think it ever happened that there was a subpoena or we never talked about a subpoena for the VP but a city mayor, even if he’s a Binay, has no reason to act as if he’s untouchable or above the law.)

When the hearing resumed, the committee staff informed the body that the vice president declined the committee’s invitation while the mayor questioned the jurisdiction of the body to conduct the investigation.

Aside from the Binays though, Cayetano noted that even Makati officials invited to the hearing, were absent.

Senator Aqulino Pimentel III, who is presiding over the hearing, then reiterated their invitation to the Makati officials so the committee would not be forced to issue another subpoena to compel them to attend the hearing.

Mayor Binay’s lawyer, Claro Certeza, attended the hearing and placed on record his client’s objection to the proceeding.
RELATED STORIES