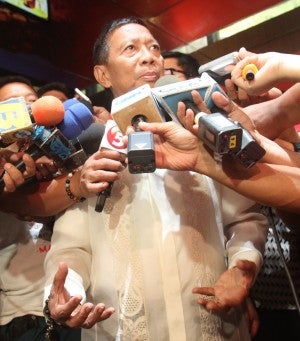 Binay, who is also the Chairman of the Housing and Urban Development Coordinating Council, told the senate blue ribbon committee through his spokesman that the vice president would not attend the senate inquiry.

Binay conducted a dialogue with the beneficiaries of the housing project but told the crowd not to cheer loudly as he might be accused of another misdeed by his detractors.

The Vice President was accused of early campaigning when he delivered a speech on September 18 to defend himself on the allegations thrown against him.

Philippine Daily Inquirer reporter Christine Avendaño tweeted that Binay’s spokesperson, Jonvic Remulla, said that the Vice President declined the invitation on the Senate inquiry because he wanted to work and not to get into politics.

Earlier Thursday, the younger Binay snubbed the Senate subpoena, saying his camp would question the jurisdiction of the upper chamber to investigate the matter.

DILG: Face shields out, but still better to bring them