DOE: Aquino emergency power to last for 1 year only 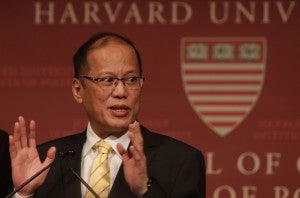 The three-page draft document, made available to those who attended, said the additional authority allowing Aquino to contract additional generating capacity will only be effective for one year after the approval of the joint resolution.

It said the generation capacity to be contracted should be around 300 to 600 megawatts, should trade under the Wholesale Electricity Spot Market (Wesm), and be made available “during critical supply situations” only.

The draft resolution cited Section 71 of Republic Act no. 9136 or the Electric Power Industry Reform Act (Epira) as its basis and argued that “The imminent threat of electric power shortage in the months of 2015 is a threat to the country’s economic and social life.”

DOE staff confirmed that it was their draft but it was not tackled by the committee since it has yet to be filed or sponsored by a senator.

Senate energy committee chair Senator Sergio Osmena III said he does not consider the draft as an official document since it was not signed.

“This was given to me last week by Congressman (Reynaldo) Umali . Pumunta sya dito (He went here),” the Senator said.

He complained that he cannot comment on Energy Secretary Carlos Jericho Petilla’s claim that the joint resolution tackled not only contracted capacity but also other options since he has yet to receive a signed copy.

Offhand, Osmena told INQUIRER.net that he questioned the draft’s provision on negotiated contracts, which he says the public will most likely frown upon given the country’s negative experience with such contracts.

The draft states that the negotiated contracts may be executed by the Power Sector Assets and Liabilities Management Corporation (Psalm) or any other government agency in coordination with the DOE.  It added that “transparency shall be observed in all stages.”

But during the hearing, Petilla admitted that there was not enough time to conduct a public bidding for the additional generating capacity.

“When you contract there is no public bidding?” Senator Ralph Recto asked Energy Secretary Carlos Jericho Petilla during a Senate committee on energy hearing.

“Yes, Mr. Chair, because there is little time to contract at this point,” Petilla said.

Recto pointed out that the Executive should have asked for contracting power earlier but Petilla said it took time because they tried to solve the problem through other means.

“I already informed the President but he wanted to exhaust all possible measures before we go into contracting,” the energy secretary said.

Petilla explained that the recommended body that will do the contracting will ensure that the process will be transparent. He said the quotes or prices will be posted online.

In the end, Osmena said he was not convinced that Aquino should be given authority to contract additional power plants.

“I’m not amenable to that and I will recommend to the members of the committee that the alternative is much cheaper, less risk and better for the country,” Osmena told reporters.

Petilla tried to convince senators that a joint resolution was necessary to address the projected power shortage during the summer of 2015.

But Osmena said he was not “happy” with the numbers.

“It is too convoluted and we have to explain this to the public. I want to give a chance to the business groups they might come up with beautiful ideas and suggestions,” he said during the hearing.

Petilla argued that the increase would be negligible, especially with the secondary price cap imposed on the Wholesale Electricity Sport Market (WESM).

He said during yellow alert, the “theoretical” maximum increase would be P2 per kilowatt hour but with the secondary cap it could be around P0.20 only.

For his part, Osmena said the capital expenditure alone for leasing or buying a modular power plant would be P25 to P35 per kilowatt hour.

“So If I will only pay P9 to P14 to ask somebody to run his existing plant na nandyan na, mas maigi yun, di ba (that’s better right)?” he said.

Asked if he will give into the request of the President, he said, “My recommendation at this time is to study it some more but if I decide today I would not give it to him.”

He said he preferred the Interruptible Load Program (ILP) which will allow the country to buy excess power from those with private generating sets.

Although the current capacity under the ILP is not enough, he said the program is now gaining ground in the business sector.

During his presentation, Petilla said the country will experience a shortage of about 800 megawatts for a couple of months next year. However, they will only need around 377 megawatts if other options including the ILP are factored in.

He explained that the El Nino expected during the summer of 2015 will affect hydro power plants and result in power shortage. This is in addition to the high demand for electricity during the summer because of the heat.

Aquino earlier called on the public to reduce the use of airconditioning units during the summer to save on energy and prevent blackouts from happening.