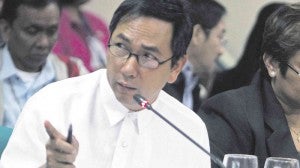 MANILA, Philippines – The Senate committee on energy convened on Thursday morning to tackle President Benigno Aquino III’s request for authority to address the looming energy shortage in the summer of 2015.

The joint resolution is in accordance with Section 71 of Republic Act no. 9136 or the Electric Power Industry Reform Act of 2001.

Petilla earlier mentioned the need for emergency powers to address the projected shortage. Aquino later announced that he would be requesting Congress for the joint resolution but Palace officials claimed it should not be considered emergency powers and instead be referred to as a request for authority.

He then sent a letter to both houses of Congress for the enactment of the said joint resolution though no draft has been forwarded.

The House of Representatives said it has yet to draft the joint resolution while the Senate asked Palace for a draft.