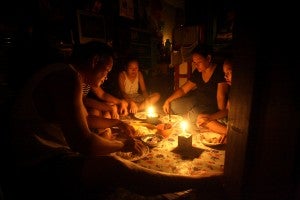 MANILA, Philippines — Luzon and Visayas are expected to face an 800-megawatt (MW) power shortage during the summer in 2015 due to the onset of mild El Niño, the energy secretary said on Monday.

Energy Secretary Carlos Jericho Petilla said the power shortage is due to thinning hydropower capacity as well as the high demand for power during the summer.

“Three weeks ago, we projected 600 MW. Now, it’s 800 MW projected for next year,” Petilla, who was in the House of Representatives for the Department of Energy budget plenary debates, told reporters.

An average Filipino household consumes 200 kilowatts per hour every month.

In its computation for Tuesday, September 23, the National Grid Corporation of the Philippines said that Luzon has an available capacity of 8,134 MW, while Visayas has 1,673 MW.

President Benigno Aquino III has asked Congress to grant him the authority to contract additional capacity precisely to address the looming power shortage during the summer, as granted to him under the Electric Power Industry Reform Act (Epira).

Epira allows emergency powers to the President “upon the determination by the President of the Philippines of an imminent shortage of the supply of electricity.”

Petilla said he has asked the President to contract at least 300 MW of the total shortage.

He said if Congress fails to approve the joint resolution granting the President emergency powers for a year to contract additional power capacity, the department will have to resort to other alternatives like the Interruptible Load Program (ILP).

This is to give way for the other customers who may need the power than the commercial users. The businesses are also required to contribute their excess energy reserves.

Petilla said that as of now, businesses which volunteered to participate in the ILP have only contributed 160 MW, when he was hoping the program would contribute as much as 700 MW of the shortage.

Petilla also said the ILP is voluntary and that they could not force businesses to participate.

“We really can’t force them. If we make it mandatory, it will be scary. We’re banking on their good hearts,” Petilla said.

The energy secretary said government would source at least P6 billion in subsidy for the additional power contracts from the Malampaya power plant.

Meanwhile, the fuel costs would be passed on to consumers, pegged at the prevailing market price of P0.20 to P0.50 per kilowatt hour increase during the summer, Petilla said.

The Cabinet official expressed his hope that Congress would approve the joint resolution granting the President emergency powers.

“I’m confident that they will not allow this country to go into darkness,” Petilla said.

Meanwhile, the power situation in Mindanao, which is usually plagued with rotating brownouts due to its dependence on hydropower, is expected to stabilize in 2015 due to a combination of hydropower, electric cooperatives and coal-fired plants, Petilla said.

A power plant on every roof