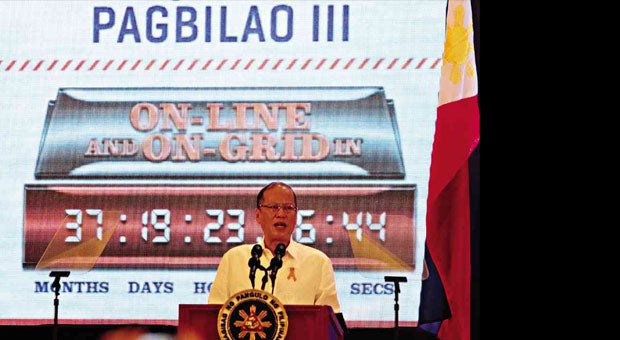 EMPOWERMENT President Aquino announces plans to seek emergency powers through a joint congressional resolution to deal with an impending shortage of 600 megawatts by next year in Luzon during the launch of the Pagbilao III power plant project at Fairmont Makati on Thursday. GRIG C. MONTEGRANDE

In a speech during the launching of the Pagbilao III power plant project in Makati on Thursday, Aquino said he would seek a joint congressional resolution—which will have the force of law—so the government could “contract” additional generating capacity of around 600 megawatts.

“To be more efficient and impactful in our efforts, very soon, we will formally ask Congress for a joint resolution, that will authorize the national government to contract an additional generating capacity to address the 300-megawatt projected deficit, and, on top of that, to have sufficient regulating reserves equivalent to 4 percent of peak demand, for another 300 megawatts,” he said.

Aquino sought to assure the private sector that “government intervention will be focused solely on addressing the projected shortage.”

“We have no plans of intervening to distort the market or complicate the situation even further,” he said, echoing Energy Secretary Jericho Petilla’s proposal contained in the 2014 State of the Nation (Sona) technical report.

“After all, we know that it is only through the government and the private sector working together that the Philippine energy sector can realize its full potential—that together, we can find solutions now, and address existing issues once and for all.”

Shortage from March to May

The Petilla proposal called on the President to invoke Section 71 of the Electric Power Industry Reform Act (Epira) of 2001.

But Aquino noticeably did not adopt the full language of Section 71, also known as the “electric power crisis provision,” when he said the national government should be allowed to “contract” additional generating capacity.

Section 71 states that Congress could allow the “establishment of additional generating capacity under such terms and conditions as it may approve.”

Aside from “contracting additional generating capacity,” Aquino instructed the Department of Energy (DOE) to “continue to solicit participation” in the Interruptible Load Program (ILP) until 2015.

The program taps those with spare generators like Manila Electric Co. to make their units available to come up with additional capacity. The government would compensate the generator owners with the approval of the Energy Regulatory Commission, Aquino said.

“But this is a voluntary program, and private companies will have their own, valid reasons to choose to participate or not in this venture,” he said.

The President described the 400-MW Pagbilao III project to be completed in November 2017 as a “strategic investment, not only in infrastructure and equipment, but also and more important, in the future of the Filipino people and our country.”

“This is absolutely necessary to ensure a steady supply of the power that Filipinos need day in, and day out, even as we seek to diversify the energy mix by bringing in other power sources,” he said, adding that it would also generate some 2,000 jobs.

Asked how the House would respond to Aquino’s request, Speaker Feliciano Belmonte Jr. said in a text message: “Probably favorably as it would be unthinkable not to avert a future shortage.”

But Aquino’s critics were skeptical.

Bayan Muna Rep. Neri Colmenares said the Department of Energy had, to date, not sufficiently established that there was an impending power crisis.

“The President asked for emergency powers just like Republic Act No. 7648 during [former President Fidel] Ramos’ time and the essence of this power is to ask Congress for authority to enter into negotiated contracts for additional generating capacity,” he said.

“But up till now the [DOE] has not sufficiently laid out the reason for emergency powers because as their own data show there is enough power supply,” Colmenares said in a statement.

Alliance of Concerned Teachers Rep. Antonio Tinio said, “I don’t think a President who has committed unconstitutional acts, publicly criticized the Supreme Court for doing its job, and expressed his desire to stay on in Malacañang beyond 2016 can be trusted with emergency powers.” he said. “Congress must find another way to solve the power crisis.”

Said Deputy Speaker Giorgidi Aggabao: “We adopted the same tack during the time of President Ramos and it led to skyrocketing power rates. The challenge then for [Aquino] is to make certain this grant he seeks would not lead to perversely high power rates.”

Marikina Rep. Miro Quimbo said that while he favored Aquino’s action, Congress must ensure that the emergency powers would be limited and temporary.

“We must not allow it to last beyond the period during which the emergency exists and cannot reach into other areas that are not in any way connected to solving the emergency,” he said.–With a report from DJ Yap