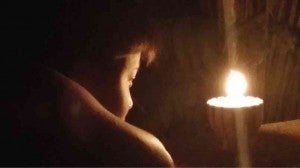 NO IPAD, TV, mobile phone or even reading for this boy in Zamboanga City as he stares at the only source of light in his home, a lit candle, in a scene repeated many times over in many parts of Mindanao being plagued by a crisis in power. JULIE S. ALIPALA/ INQUIRER MINDANAO

DAVAO CITY, Philippines—Police are seeing a link between the power shortage that is gripping this city and other parts of Mindanao and a spike in the number of crimes in areas plagued by outages that last up to more than seven hours a day.

In this city alone, Senior Supt. Vicente Danao Jr., city police chief, said the number of crimes that police have recorded has increased by 45 percent, or nearly half, in the first quarter of the year compared to the same period last year.

The city and other parts of Mindanao started to be plagued by brownouts in March as a result of a shortage in electricity that was made worse by the reduced output of two hydropower facilities—Angus and Pulangi—that supply 60 percent of Mindanao’s power.

Danao said by March, when the outages started being more frequent and longer, police started to record at least 58 crimes a day up from the 32 crimes reported daily in the same period last year.

He said in the first three months of the year alone, 4,000 crimes have been committed mostly against persons and property.

Danao said he believed the rotating brownouts are to blame for the spike in crimes.

For instance, he said, the outages are rendering CCTV cameras, which help in crime prevention and investigation, useless.

“Zero visibility,” said Danao. “You cannot see in the dark even if you have a generator,” he added.

He said police had to resort to extra effort, like increased visibility, to fill the gap that anticrime measures being crippled by the outages have left.

“I myself go on patrol,” said Danao.

Col. Casiano Monilla, head of the anticrime Task Force Davao, said soldiers, too, have been deployed to strategic areas in the city to help police fight crime amid the brownouts.

He said 17 members of the task force are to roam the city aboard motorcycles as a crime prevention measure.

Each watchman would be paid P6,000 per month and get training on peacekeeping, said Duterte. They may also be issued firearms, he said.

“We have to give them more police power,” said the mayor.

In Cotabato City, police and military authorities said they were also bracing for a surge in criminality, particularly kidnappings, because of the outages.

“This is a united effort to quell lawlessness and terrorism that may occur at night while we are experiencing brownouts,” said Col. Dickson Hermoso, spokesperson of the 6th Infantry Division.

Recon members are armed with VHF radios that they can use to report crimes, he said.

The outages are also disrupting the ongoing registration of new voters in Kidapawan City, which is being plagued by up to six hours of brownouts daily.

Javier said his office has requested for a generator from the Commission on Elections main office in Manila but there has been no response yet. Reports from Allan Nawal, Williamor Magbanua, Charlie Señase and Eldie Aguirre, Inquirer Mindanao