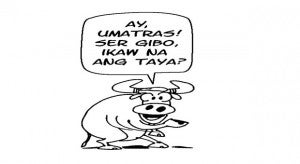 Speaking to reporters on Wednesday night, the tough-talking Duterte said he would retire from politics when his mayoralty term ends in 2016 despite speculation he is gunning for a national position.

Santiago said Wednesday that she might run for President in 2016 and that her choices for running mate included Duterte, former defense chief Teodoro and Sen. Grace Poe.

Poe earlier said she was flattered by Santiago’s overtures but said she had no plans to run for higher office.

Teodoro could not be reached for comment on Thursday on his political plans.

“I am flattered and honored by the declaration of Senator Santiago but unfortunately I said I am not good for national office. Besides, I intend to retire after this term,” Duterte told reporters.

Duterte said he wished his public declaration about his plan to retire would kill all speculation about him running either for President, Vice President or even for senator.

“I am making that clear to everybody now so there would be no speculation,” Duterte said.

A group called Pilipinas Duterte Movement 2016, which was initiated by barangay (village) officials in this city, has been going around gathering signatures to urge Duterte to run for President.

Duterte, however, threw his support for Teodoro and asked him to accept any invitation from Santiago to be her vice presidential running mate.

“I am asking Gilbert Teodoro to accept,” Duterte said. “He is a man of integrity and competence. And he would make a good Vice President of this republic. I know him.”

Good for President, too

Duterte added: “On a personal note, may utang na loob ako sa kanya (I owe him a debt of gratitude).”

He said Teodoro helped him during “low moments” in his life when the camp of a political rival filed cases against him.

Aside from his public endorsement, Duterte also pledged to commit his resources for Teodoro’s candidacy, adding that the former defense secretary would also be an ideal President.

“He would make a good President, by the way,” Duterte said.

Duterte also shrugged off reports that two generals had met with him to talk about staging a coup d’etat against the present administration.

“Every time, I go around… I talk to generals. But it’s not true that there is a planned coup d’etat,” he said.

“I will not be a party to any seizure of government,” Duterte said. “And I will not serve a government that is forced upon the people. That is crazy.”

Loyalty to the end

Duterte added that aside from respecting the democratic process of election, he also respects the Aquino administration.

“It’s not in my system to do that and besides, I supported President Aquino. And he has my loyalty to the very end, to the last minute and second of his presidency,” Duterte said.

Santiago, who said she had been diagnosed with Stage 4 lung cancer, told reporters Wednesday that any run by her for public office again would depend on her full recovery.

“I’m considering Rody Duterte [for Vice President] in my opium dreams,” she said. She also mentioned Teodoro, the Arroyo administration’s presidential candidate who lost to Aquino in 2010.–Inquirer Mindanao with Inquirer Research