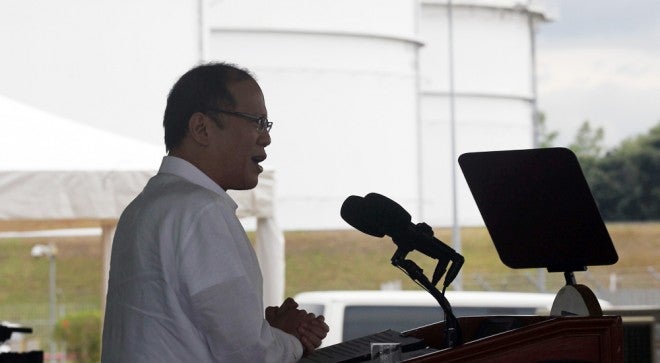 BATANGAS CITY, Philippines—President Aquino on Tuesday sought to douse fears of a looming power crisis, announcing that “various companies are set to build new plants in Luzon” between now and 2016.

He said the constructions would produce a total generation capacity of 2,412 megawatts (MW), which would be more than the projected additional energy demand from the Luzon grid in two years.

“Of course, the goal is not simply to meet demand, but to surpass it. We intend to have a safe surplus of generating capacity,” he said in a speech at the groundbreaking ceremony for the $600-million natural gas-fired San Gabriel project here.

“Visayas and Mindanao, as well, are benefiting from the renewed optimism of investors, and I am happy to report that we are set to meet increasing demand in both regions in the coming years,” he added.

The President was upbeat over the San Gabriel project, which would consist of three power plants with a 414-MW capacity each.

Francis Giles Puno, First Gen Corp. president and chief operating officer, said the two other plants “can be constructed and completed from 2017 onward depending on market needs and the availability of additional Malampaya gas or imported LNG [liquefied natural gas].”

Aquino said the “plant will be crucial to our country’s fortunes,” noting that First Gen undertook the project despite the absence of long-term contracts.

“They don’t have locked-in contracts. But it is a mark of confidence in both the economy and the potential takers for their production,” he told reporters afterward.

“Without new power supply, consumers in the Luzon grid will suffer from rotating brownouts and/or pay for running the more costly and less-efficient oil-fired plants,” he said in a separate speech.

“Mr. President, we don’t want brownouts to recur,” he added.

Learning from Supertyphoon “Yolanda,” which crippled power facilities in the Visayas, and given the “worsening effects of climate change,” the President cited the need to “reassess the sources of our power and their effects on the environment.”

“In the coming years, we will make a concerted effort to use more efficient forms of energy generation and natural gas will play a starring role in this,” he said.

“Natural gas plants emit only half as much carbon compared with coal-powered power plants. This means cleaner energy; it means that despite our status as a less-industrialized nation, we are doing our part to not exacerbate the risks posed by climate change.”