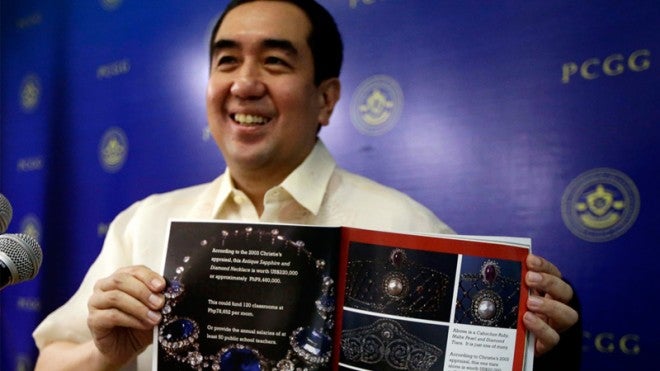 Andres Bautista, chairman of the Presidential Commission on Good Government, which is tasked with recovering the alleged ill-gotten wealth of the late dictator Ferdinand Marcos and his family, shows a catalog of a seized jewelry collection belonging to the Marcoses at a news conference Tuesday, Jan. 14, 2014. The antigraft court has ruled the collection is ill-gotten. AP PHOTO/BULLIT MARQUEZ

MANILA, Philippines—The Sandiganbayan’s ruling that a collection of jewels owned by former first lady Imelda Marcos is “ill-gotten” potentially paves the way for an auction of the seized treasures.

The antigraft court decided that the “Malacañang Collection,” the smallest of three confiscated from the Marcos estate and worth some $150,000, was rightfully owned by the government.

“Partial judgment is hereby rendered declaring the pieces of jewelry, known as the Malacañang Collection, as ill-gotten, and are hereby forfeited in favor of petitioner Republic of the Philippines,” read the 33-page ruling released on Tuesday.

“This is another victory for the Filipino people,” Presidential Commission on Good Government (PCGG) Chair Andres Bautista said of the ruling.

The Malacañang jewelry is one of three collections seized from the Marcos estate, including a 60-piece set featuring a 150-carat Burmese ruby.

The other two sets are already in government hands but the ruling is significant because previous attempts to auction off the entire haul have been derailed by legal issues relating to the Malacañang pieces.

Officials said the court ruling on its forfeiture meant that an auction could now proceed.

An assessment made by Christie’s in 1991 put the value of the three collections at up to $8.5 million.

The pieces in the smallest collection were seized from Malacañang after the 1986 Edsa People Power Revolution ended Ferdinand Marcos’ rule.

The two other collections include 60 pieces of jewelry seized from Demetriou Roumeliotes, a Greek friend of the Marcoses, as he was leaving the country.

Among the more expensive pieces in the entire collection are an antique sapphire and diamond necklace worth $220,000 and a Persian-style necklace made from more than 100 carats of yellow and pink diamonds.

The third collection was seized from the Marcoses when they fled to Hawaii.

The Philippine government has said it has so far recovered about $4 billion of an estimated stolen wealth of $10 billion.

The government said it wanted to put the jewelry on public display or auction it off to raise funds for its poverty alleviation programs.

The Marcos family has tried to block the government from claiming the treasures.

Monday’s judgment could still be appealed.

Bautista said that as of end-2012, the PCGG had recovered P164 billion of Marcos’ supposedly ill-gotten wealth estimated by some at $4 billion.

Bautista also said the PCGG was “making arrangements” so that the more than $23 million awarded by a Singaporean court to Philippine National Bank would be “brought back to the national treasury.”

The government has said it is also still tracking more than 140 paintings by Picasso, Van Gogh and other masters bought with allegedly stolen funds by the Marcoses.

They are among 300 artworks Marcos distributed to his cronies after his regime crumbled.

Reacting to the Sandiganbayan ruling, Sen. Ferdinand Marcos Jr. hinted the case of the seized jewelry may be far from over.

“We respect the decision of the court. This is a legal battle already.  We leave it to our legal team to do all the necessary actions,” he said in a text message.—Reports from AFP and Kristine Felisse Mangunay