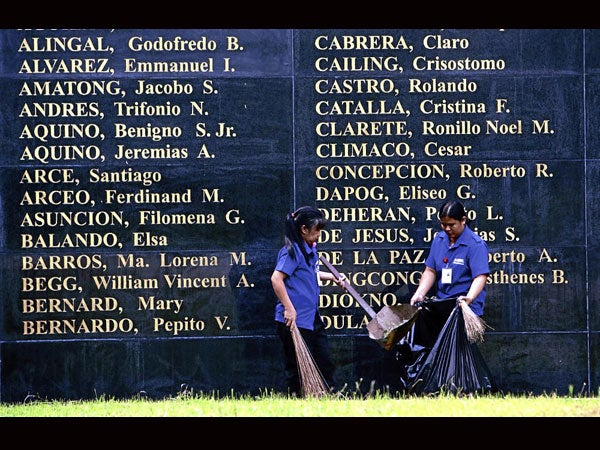 DOZENS of names of men and women who fought the Marcos dictatorship are etched on the Bantayog ng mga Bayani memorial that was built for people who resisted one-man rule. Thousands of others who gave up their lives for the return of democracy remain nameless. MARIANNE BERMUDEZ

Editor’s Note: Starting today, Sept. 21, the 42nd anniversary of the proclamation of martial law by President Ferdinand Marcos, we are running a series of articles to remember one of the darkest chapters in Philippine history. The articles are necessarily commemorations but more so a celebration of and a thanksgiving for the courage of the men and women who endured unspeakable adversities and loss to overcome the Marcos dictatorship and regain our freedoms. These are their stories.

In its 1977 annual report, Amnesty International (AI) quoted an open letter from Herrera’s lawyer to government officials dated May 1977, which described in vivid details the torment she went through in the hands of the regime’s interrogators.

“The electric shock was inflicted not only on her two thumbs but also on the nipple of her left breast,” the letter said. “This was done after the several shocks applied on her thumb failed to break her resistance to the demands that she ‘cooperate.’ She was ordered to remove all her clothes until she was completely naked; then she was made to attach and wind, by herself, around her left nipple the end of one of two electrode wires. While electric shock was being applied on her nipple, one of the torturers was holding the other electrode in front of her vagina—uttering threats that if she still would not ‘cooperate,’ he would attach [the] wire to her vagina. It was at this point that she asked them to stop, and promised to ‘cooperate.’”

An AI mission that came to the Philippines on Nov. 22, 1975, more than three years after Marcos placed the country under martial law, documented Herrera’s case and those of many students, journalists, engineers, teachers and pastors who were arrested on suspicion of rebellion and tortured in Marcos’ prisons.

The AI mission, which studied, among other things, “the problem of detention under martial law and the degree to which those detained without trial were denied human rights.”

The mission, composed of Amerian lawyer Thomas C. Jones and Huang Wen-hsien, a member of AI’s International Secretariat, interviewed 107 prisoners held in detention centers in Camp Crame, Fort Bonifacio and Camp Olivas in Pampanga province. Seventy-one of those prisoners informed the mission that they had been tortured.

“Almost 70 percent of the prisoners interviewed by the mission said they had been tortured. Moreover, in virtually every case of prisoners who were not tortured, there tended to be a particular factor [that] appeared to explain why the person had been spared: The detainee was a woman, or was well known, or had highly placed friends, or had some personal connection with martial law officers, or was a foreigner,” AI said in its report.

Some of the prisoners were charged with rebellion and conspiracy to commit rebellion. Some did not even know why they were arrested. Many were not even charged, the group said.

As a result of torture, it added, some landed in mental hospitals and psychiatric wards.

“In sending a mission to the Philippines, AI had not anticipated the extent to which torture was practiced against martial law detainees,” AI said in its report, which was released in September 1976.

“The practice of torture during detention under martial law underlines the deeply troubling aspects of the system of arrest and detention employed as a consequence of the exceptional powers available to the martial law administration,” the group said.

The report detailed torture methods used on the prisoners interviewed. These included prolonged beatings with fists, kicks and karate blows; beatings using rifle butts, heavy wooden clubs and family-size soft drink bottles; pounding heads against walls or furniture; burning of genitals and pubic hair with cigarette lighters; falanga, or beating of the soles of the feet; and “lying on air,” where the prisoner was made to lie with his head on one bed and his feet on a second bed, and was beaten and kicked whenever his body sagged or he fell. This method of torture was also called San Juanico Bridge, after a bridge connecting Samar and Leyte provinces built during the Marcos administration.

[So-called “Bridge of Love,” as it was purportedly Marcos’ gift to his wide Imelda, whose home province is Leyte.—Ed.]

Others reported being stripped naked and beaten, or being made to stay awake for several days without sleep, according to the report. 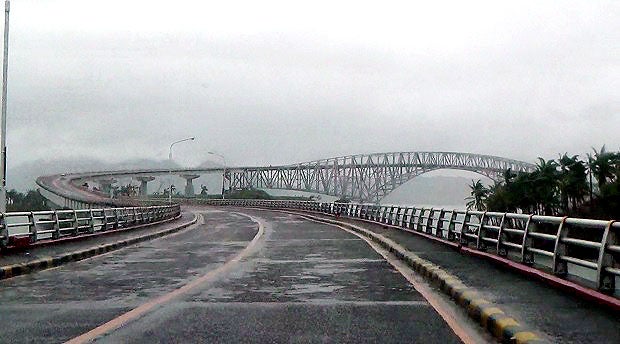 Another form of torture used was the “Russian roulette,” where a prisoner was made to spin the cylinder of a cocked revolver loaded with just one bullet, put the muzzle to his temple and press the trigger.

Some were made to sit on a block of ice then shocked by thrusting an electrically charged wire into the block. Others were handcuffed to their cots for being uncooperative, the report said.

The AI mission made 15 detailed recommendations, which were sent to the Philippine government in May 1976.

The government’s comments were received in October of the same year and another version of the AI report incorporating the government’s response was released in March 1977.

The government’s comments, signed by then Solicitor General Estelito Mendoza, mainly criticized the mission for interviewing what the government deemed “an inadequate sample of political detainees” whom the government described as “extreme subversives who gave fabricated and false accounts of torture.”

AI’s recommendations were all geared toward reducing the incidence of torture and included the release of the prisoners listed in the report on bail pending trial, the trial of all political prisoners by civil courts and not by military tribunals, and the restoration without delay of the writ of habeas corpus.

The mission also recommended to then Minister of National Defense Juan Ponce Enrile that all women held in detention who had young children be released, especially in cases where both husband and wife were detained and the young child was also kept in prison.

AI said the mission understood that there were administrative provisions for the release of women with young children when both husband and wife were detained, but the mission was unable to secure an adequate explanation for the continued detention of these women prisoners.

The mission reported that it was deeply concerned over the cases of prisoners belonging to the Hilao family. It said Winifredo Hilao was subjected to “extremely brutal torture.” So was his brother-in-law, Romeo Enriquez.

Winifredo’s sisters Josefina, 19, and Amarylis, 21, were also prisoners. His wife, Violeta Sevandal, was also a prisoner. His nephew, who was 7 weeks old at the time of the mission’s visit, was in prison with Amarylis.

The family, according to the mission, firmly believed that Winifredo’s sister, Liliosa, who died while in detention, was killed by her interrogators during questioning. The mission said it was not convinced that the authorities did not undertake sufficient investigation to examine the allegation that Liliosa was murdered.

In view of the circumstances of the Hilao cases, AI recommended that an unconditional amnesty be granted to all the members of the family and that a full, independent inquiry be conducted regarding the death of Liliosa.

AI said there were “indications” that the Philippine government “may have accepted some of the 15 recommendations,” noting some developments in 1976, including the filing of charges against four soldiers, three of whom were identified in the mission report as having tortured prisoners.

The four soldiers were identified in the report as Eddie Abalos, Sergeant Galica, Henry Kato and Lieutenant Noveras.

But AI also noted that the soldiers’ trial was postponed indefinitely a month after they were charged.

AI also noted President Marcos’ instruction for the Army to hand over to civilian courts all prisoners detained without trial under martial law as well as his announcement that the military tribunals would be phased out.

“Although these declarations have yet to be implemented, they amount to partial acceptance of the mission’s 15 recommendations; but as the newly announced government measures go no further than this, they fail to prevent violations of human rights or to abolish torture entirely,” AI said, adding that among the recommendations yet to be implemented at the time included the abolition of “safe houses,” the release of political prisoners on bail pending trial and the restoration of habeas corpus.

AI also highlighted the case of Dr. Roger Posadas, a well-known physicist and professor at the University of the Philippines, and one of the people who were arrested after the mission left the Philippines in December 1975.

They were taken to a “safe house” for “tactical interrogation,” the AI report said.

According to the report, Posadas was tortured for a week. He was kicked, hit with fist blows and pistol-whipped during interrogation.

His wife, Linda, then 28, was reportedly stripped and held for six hours with their son in an especially cold air-conditioned room.

At the time, AI estimated that there were at least 2,000 political prisoners held on suspicion of subversion—more than Enrile’s estimate of around 1,400 people detained in the Philippines for “crimes against national security” and well above President Marcos’ figure of 598 when he spoke before the Foreign Correspondents’ Association in June 1977.

Marcos diaries: ‘Delusions of a dictator’