Marcos diaries: ‘Delusions of a dictator’ 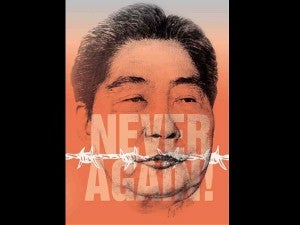 ‘PORTRAIT OF PUTRIDITY, DECAY’  Portrait of the exiled Ferdinand Marcos as he faced his death in Hawaii by lupus in 1989. As a martial law victim puts it: “its architect is a portrait of putridity and decay.” Pointillist drawing by Lynett A Villariba

I was about to call it a day in the Manila bureau of the New York-based United Press International (UPI) on the night of Sept. 22, 1972, when I heard on radio that Defense Secretary Juan Ponce Enrile had been ambushed.

He had escaped unhurt, but the question on the minds of most Filipinos was put to me by Oscar Villadolid, the editor of the Philippines Herald, in a phone call just before I knocked off, “Does it mean martial law?”

Hours later, truckloads of troops and armored personnel carriers swept through the capital, rounding up Sen. Benigno Aquino Jr., the foremost opposition leader who was attending a tax hearing at the Hilton Hotel near the UPI office on UN Avenue, and scores of political leaders and newspapermen, padlocking Congress and shutting down newspapers and radio and TV stations.

The alleged attempt on the life of Enrile was widely believed to have triggered the declaration of martial law, announced by President Ferdinand Marcos in a nationwide broadcast the following evening, on Sept. 23.

The emergency proclamation was backdated to Sept. 21—divisible by seven, the lucky number of the President, who was obsessed with numeracy.

On Feb. 22, 1986, hours after he broke away from Marcos following a failed coup attempt, Enrile told reporters his ambush was faked. In his memoir published last year, however, Enrile went back to his old story, that Marcos had written about in his diaries as the final straw, as it were, that broke the camel’s back.

The diaries were discovered in Malacañang, after the ouster of Marcos in the People Power massing at Camp Aguinaldo following the breakaway by Enrile and Gen. Fidel Ramos.

Marcos began to write the diaries in January 1970 after his election to an unprecedented second four-year term. He had at the time convened the Constitutional Convention to change the presidential type of government and adopt a parliamentary system, amid apprehensions he would prolong his rule.

The first entry on Jan. 1, 1970, said: “I start a daily written record of my second term in office as President. This will be kept in loose-leaf so that all kinds of materials may be attached to the binder. Thus the background should be a treatise on the elections of 1969. This will be composed of my critique as well as the commentaries on the technique of victory.”

The diaries fell in the hands of journalists who promptly dismissed them as nothing more than the “delusions of a dictator”—a title given to the book on the subject by an American reporter, William C. Rempel.

How the documents, in Marcos’ legible handwriting on Malacañang stationery, should be treated by historians should be taken in the light of an entry he had written on the supposed Enrile assassination attempt.

Correspondent Stanley Karnow, in his book “In Our Image: America’s Empire in the Philippines,” which won a Pulitzer prize, recounts that Enrile had told him after his aborted coup that the incident was a sham. “He was nowhere near the scene, but had simply ordered his own gunmen to shoot up his empty Ford.”

The following are excerpts from the diaries focusing on the three months before the imposition of martial law, when the nation was gripped by fear of terrorist bombings and assassinations, the discovery of a communist arms landing from China by the motor vessel Karagatan off Isabela, the attempts to manipulate the 1970 Constitutional Convention and the deluge that swept Luzon comparable to the biblical 40 days and nights of rain.

The diaries begin following a blast by Ninoy Aquino in the Senate on the profligate lifestyle of first lady Imelda Marcos, which led to her loss of her fourth child.

Imelda is suffering from pain and from a deep sense of loss and sorrow for the abortion about which I have told her. She feels inadequate and has been crying her eyes out.

I have shed no tears for my unborn child, but I have vowed that I shall cure this sick society that has brought about the anguish of my wife, which caused the abortion. For the media has been vicious—it has condemned for a crime not charged, foisted gossip as truth and disregarded the rights of fair and impartial trial.

And this sick man who has committed perjury, libel and bribery has done me at least one favor. He has opened my eyes to this illness of our society that may yet destroy it. And my duty and mission is now to cure that illness.

Met the media in a TV interview at 8 p.m. I admitted I was bitter because I had lost a child and this was due to our sick society which I would try to reform within the short time that I had.

I hope the public does not give all kinds of meanings to this statement.

But I am bitter and angry!

I have just answered a letter of Concon (Constitutional Convention) President [Diosdado] Macapagal where he asks whether I or Imelda are running for President in 1972. I wrote him through [Information Secretary Francisco] Kits Tatad that neither Imelda nor I intend to run—I because I am disqualified by the Constitution from a third term and Imelda because she has no intention to do so…

Apparently President Macapagal has decided to lay the blame on me for the failure of the convention.

The plot to assassinate me has been confirmed by one of the co-conspirators paid in advance of P4,000. This was supposed to take place on Independence Day, June 12th.

Imelda and I have been reminiscing in bed—the long tortuous road from Congress to the presidency, the sacrifices, her tears, pain and hard work that went into our struggle for power.

She put purpose into my life—the life of a spoiled bachelor congressman who was also a successful trial lawyer and a hero of the last war who tended to be too carefree and frivolous.

In 11 years I jumped from congressman to President.

Sen. Benigno Aquino Jr., in undisguised relish, predicts revolution in the Philippines. Writing in an article “Youth in revolt” in the Far Eastern Economic Review of June 10, 1972, he gleefully quotes the usual statistics of doom: the economic elite of 1.5 percent, the 75 percent poor and the 23.5 percent middle class; the economic profile—only 2.6 percent of Filipino families earn P10,000 ($1,538) or more a year,

If this constitutional reform is ratified, the way is open for me to become prime minister. If it is not ratified, Imelda may have to run for President as there is no other candidate that can win against the Liberals.

But the parliamentary form of government will save Imelda from the muckraking of politics.

The Liberals must be agitated now. And so must the senators. For a unicameral form of legislature will follow. And they are out.

Secretary of National Defense Juan Ponce Enrile reports after coming from Diguyo, Palanan and the first NPA camp [was overrun] that the NPAs most probably succeeded in fleeing with more guns than captured and the worse part is that in the NPA camp, the boxes for rocket launchers were found, but the contents had been apparently brought by the retreating NPAs. This portends more serious and massive attacks on convoys, installations and perhaps urban centers.

(Diary entries report about the arms landing by the MV Karagatan off Isabela and a military assault on the guerrillas in the midst of a typhoon.)

Commander Pusa has started to attack AFP installations in Capas, Concepcion and other towns in Tarlac, apparently a diversion to keep the troops from Isabela.

The media, specially the newspapers, have forfeited their right to freedom of the press. They have abused it to the point where they actually seek to falsify news.

The prime example is the Karagatan case and the fighting in Palanan.

There must be a way to prevent these irresponsible advocates of not press freedom but press tyranny from weakening the state and the democracy that gives them the liberty that their friends, the communists, seek to destroy.

Raining since yesterday and Luzon, including Manila, is flooded all over again. The Tarlac dike in San Miguel has been washed away.

Lunched with Sen. Arturo Tolentino. He himself believes as he reiterated that during this period, a dictatorship is necessary in the Philippines.

I asked him whom he would recommend for a revolutionary council. And he could not find any in any of the contemporary leaders. I informed him of the seriousness of the situation.

Senator Teves told me tonight that even Sen. Ninoy Aquino observed in confidence that the discovery in Palanan shows the NPAs pose a threat more serious than we think.

Everyone seems to be wondering whether I will declare martial law.

A time bomb was discovered in the Senate. It was napalm in an attaché case set in the publications division and loaded with napalm, set to explode 9 p.m. Saturday.